Climate change remains an abstraction for many in Ireland, but not for those suffering in Africa 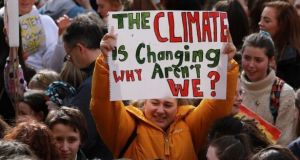 If we want to protect generations to come, one possible vaccine for the environmental crisis is learning some lessons from the current one, if only for the sake of our children’s children. Photograph: Nick Bradshaw

Perhaps the most startling statistic to emerge from the latest Irish Times/Ipsos MRBI opinion poll is that only 26 per cent of Green voters believe that climate change should be the top priority for the next government. Therefore, almost three-quarters do not.

If ever there were an indicator that we are unlikely to learn much from this pandemic, this is probably it. If the majority of Green voters do not think that the next government should primarily focus on the climate, is it at all surprising that only 4 per cent of Fine Gael and Fianna Fáil voters believe it to be the most important issue?

One would have thought, however, that this catastrophic crisis would have focused our minds on how to avoid other disasters. Aside from a few die-hard sceptics, climate change is accepted as fact by everyone, from the pope to potato farmers. There is, however, a great deal of disagreement as to how much pain we should take now in order to avoid more pain later. Accepting on an intellectual level that there is a problem is entirely different from taking action now.

In one way, the coronavirus crisis is nothing like the problem of climate change. The former is like the sudden outbreak of world war, everywhere and at all times visible, whereas the latter remains remote and intangible unless you happen to live in one of the low-income countries. Climate change is not an abstraction if you are one of the 40 million people living in East Africa, where they face the triple threat of coronavirus, flooding and locusts. While locusts have swarmed for thousands of years and it is hard to attribute any one event to climate change, it focuses the mind.

CS Lewis delivered a famous sermon in 1939, called “Learning in Wartime”. The sermon, ostensibly, is about whether it could be justified to go on studying at university when such momentous events were happening elsewhere.

As you might guess, Lewis affirms the importance of traditional humanistic learning. But his talk is also, and perhaps more importantly, a meditation on this question: given the inevitability of death, what is the best way to live? He says that “the war creates no absolutely new situation: it simply aggravates the permanent human situation so that we can no longer ignore it”.

For many people, frantic busyness gives no time to think about anything except the next 15 pending tasks. But it appears that even those who experienced enforced time for contemplation these past months did not use much of that time to think about environmental challenges.

And yet, there should have been some aspects of the crisis that helped us to stop and think. People marvelled at the clean air, the sound of birdsong and appreciated perhaps for the first time what a blessing it is to have soothing green spaces in which to take even socially distanced exercise.

Food continued to arrive in our stores but the panic buying at the beginning reminded us that food does not originate in a factory, a warehouse or a supermarket. Anything worth eating is grown in some way.

And when workplace-transmitted coronavirus infections in meat-processing plants increased by 328 in one week, we realised uneasily how close we are at any time to losing a vital part of a supply chain.

Despite all that, the economic shock caused by the current crisis is likely to make people even more averse to anything that seems to pose too high an economic cost. Rebuilding the economy in a climate-friendly way is, without doubt, a massive challenge.

Putting off mitigation measures now on the grounds of a current crisis is not so much short-sighted as blind, given that action now prevents the need for even more drastic action later. As Lewis says in the same talk: “The only reason why the cancer at 60 or the paralysis at 75 do not bother us is that we forget them. War makes death real to us.” How do we make environmental disaster as real to us as the pandemic is?

One of the good things that emerged from the current crisis was a renewed appreciation of the importance of the bonds between generations, especially grandparents and grandchildren. We live in hope of a vaccine for the virus. If we want to protect generations to come, one possible vaccine for the environmental crisis is learning some lessons from the current one, if only for the sake of our children’s children.