Britain is bigger than the anti-Irishness of the Daily Express 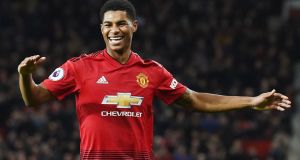 Good news for the Express. Varadkar is gone, at last having received his just desserts for “meddling” in Brexit. The Irish people have said “no more!”. And Britain is once again free from the naive, upstart Taoiseach, snapping at its ankles as it embarks on its future – out of the EU, away from the shadowy lawmakers in Brussels, with its oldest and closest neighbour back in its rightful box.

To mark such an occasion the newspaper ran with the jubilant headline: “End of Varadkar! Irish PM removed in coalition deal after years of Brexit meddling.”

Unfortunately for the Express, the next couple of years might prove to be a letdown. Few would want to be in the same room as the editorial board when the realisation dawns on them that they haven’t rid themselves of their most loathed gadfly after all. Instead, they will likely be treated to Varadkar in a different role, still donning his feared sovereignty-thwarting mask.

The surprising thing amid all of this is that it came as a surprise to anyone at all. In fact, what the Express wrote was wholly predictable, in step with its historical editorial line, and sitting comfortably in the broader pattern of the right-wing British press celebrating a taoiseach “hung out to dry by the EU”, who plays “pathetic patsy” to the “Brussels oligarchy”, and whose “attempts to wreck Brexit have been a suicidal failure of statesmanship”.

The contempt certain elements of the UK press (and it is a minority) hold for the Irish Government has been a mainstay of Anglo-Irish discourse over the past three years. But, as much as we may lament what we perceive to be ignorance – or malicious cynicism – directed towards Ireland and its politicians, we would do well to remind ourselves that Britain is not defined by one tabloid newspaper. And nor should our view of Britain be defined by what the Express might think of Varadkar.

As outrage at the Express headline gathered momentum, and indignation turned to mocking the so-called ill-informed British media, a much bigger story was ongoing.

Marcus Rashford has emerged as a English national hero head and shoulders above anyone else in quite some time. The Manchester United footballer’s campaign for children to receive free school meals over the summer holidays forced the government into a policy U-turn. And now thanks to the efforts of the articulate 22-year-old striker, thousands of deprived children across the country will not go hungry.

His campaign was a timely reminder of the power of celebrity to effect change. But, it too should serve as a reminder to us that Britain in 2020 is not just what is written on the front pages of certain adversarial newspapers.

A toxicity seems to have emerged in Ireland when we talk about Britain. Some take delight in what they view as a shambolic British government, waxing lyrical about how it “could never happen over here”; balking at the far-right groups counter-protesting Black Lives Matter (though they had no widespread support and were roundly condemned); and launching vindictive attacks about the country’s likely descent into unfettered populism.

Our confirmation bias, then, means we are far more ready to accept the bad as definitive of our closest and most valuable neighbour, rather than the good. Where the Express is taken to be wholly representative of a nation that is out of step with international opinion, Rashford is dismissed as a one off – a good egg amid the rot.

You could cast this easily as a tale of two Britains: one, defined by the editorial line of the right-wing media – which leans into the myth of British exceptionalism and parrots tired invectives against its nearest and closest neighbour. And the other, with the likes of Rashford as its standard bearer – a tolerant, fundamentally liberal, forward thinking, open and entrepreneurial place.

But Britain is not a country dominated by an ignorant and malign media. Nor is it the preserve of one newspaper editor harbouring a curious disdain for the outgoing Taoiseach. It is also a country of Rashford – a man who didn’t come from nowhere, but was the product of an education system and a vibrant sporting culture. It is also a nation of the NHS, and the latest Covid-19 treatment breakthrough. A country with a cabinet – for all its flaws – that is more diverse than many.

You too could write tomes on the great values of cities such as Leeds, Newcastle and Birmingham. There are libraries to be filled with words on great British artists such as Tracey Emin, David Hockney and Damien Hirst. It is a nation with high streets dominated by democratising companies such as Waterstones and Wetherspoons. There is the Premier League, and the BBC too.

Resorting to cheap shots is easy. It is, of course, much harder to acclaim the positives in things. But in reverting to base instincts – indulging latent nationalistic one-upmanship – we reveal ourselves to be no better than the nasty headlines in the Express we are so quick to mock.

When his campaign saw government policy changed Rashford tweeted: “Just look at what we can do when we come together, THIS is England in 2020.” And, if we were to employ just a little good faith, we would realise that he is right.