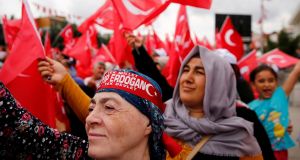 Datca town council in southwest Turkey is closing its beaches because of “expected simultaneous sand and snow storms”. The hotel we are staying in at Bozburun, on a similar peninsula further south, is also refusing guests on that day. Its owners will be in Istanbul to vote in the rerun of its mayoral election.

Istanbul residents traditionally go to these beautiful places where the Aegean meets the Mediterranean in a blaze of turquoise colours and sun this weekend. The gestures are to stop them coming and instead exercise their democratic rights.

In the local and mayoral elections last March, opposition parties captured many of the larger coastal cities like Istanbul, Alanya, Antalya and Izmir, along with the inland capital Ankara, while the AKP did badly in many of its strongholds, compared with its hard nationalist allies. The opposition victories have revived their hopes of seeing an end to the authoritarian Erdogan era, despite his new presidential powers and working majority until the next national elections in 2023.

The AKP’s loss of Istanbul, with its 15 million inhabitants and control of 40 per cent of national wealth, on a very tight vote, stood out dramatically in this political landscape. Erdogan established his political base there when he became mayor in 1994 and used it to pursue his national ambition. The veteran AKP candidate Binali Yildirim, a former minister, lost to Ekrem Imamoglu, leading an opposition coalition. He is standing again this weekend and expects to win after the first result was controversially overturned by the country’s supreme electoral council.

From a middle-class family in Trabzon, Imamoglu studied management, worked in business and became politically active in the social democrat CHP party.

Imamoglu is an unusual and surprising success in the highly polarised Turkish political scene. From a middle-class family in the Black Sea city of Trabzon, he studied management in Istanbul, worked in business and became politically active in the social democrat CHP party. Rising through its ranks he became mayor of the city’s Beylikduzu district in 2014 and proceeded to govern it in an inclusive and pluralist way. He brought that style to the campaign this year.

A practising Muslim, he reached out to AKP voters unexpectedly and also appealed to their fondness for soccer, echoing Erdogan’s own enthusiasm for the game. The Kurdish party in his coalition ceded ground to him and its jailed leader this week tweeted support. Imamoglu’s huge following on social media plays a big part in the campaign.

Istanbul residents returning to vote from the coast talk of his thoughtful, polite manner, his ease with crowds, his humour and intelligence during the televised debate with Yildirim on Sunday last (the first one since 2002) and his optimistic campaign slogan “everything will be fine”. They say this is a great change from the usual angry shouting matches of Turkish politics under Erdogan. They regard this vote as a crucial turning point in the country’s fortunes at a very auspicious time in its political, economic and international affairs.

Erdogan’s authoritarian turn in recent years was strongly reinforced after he survived an attempted coup in 2016. Since then tens of thousands of civil servants and other public officials have been dismissed, thousands of journalists and intellectuals jailed on vague charges of assisting terrorism, insulting Turkishness or attempting to overthrow its constitutional order.

Erdogan is realigning Turkey with Russia and buying defensive missiles from them, endangering defence deals with the US and relations with Nato

After the spectacular economic development period of his first decade in office, when vast infrastructural projects and industrialisation brought jobs to millions of his Anatolian supporters, the environmental costs and corrupt extravagance of such schemes, together with the large indebtedness incurred to European banks, are highlighted by the opposition – in Istanbul especially.

Turkey’s international position is also changing. Erdogan is realigning Turkey with Russia and buying defensive missiles from them, endangering defence deals with the US and relations with Nato. His sympathy with the Muslim Brotherhood in the Middle East region pitches him against Egypt and Saudi Arabia. Relations with the EU are troubled by their rejection of Turkish membership yet reliance on it as a buffer against Syrian refugees, of whom it hosts three million who might otherwise travel to Europe.

The wealth and modernity of Turkey’s 80 million population and its great potential for development inspire those who support Ekrem Imamoglu and hope he can deliver in future years on the promise he has already shown.