An American phenomenon: Forgetting seems to be the only option 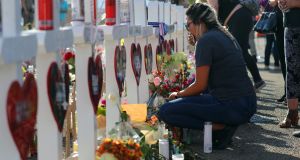 Mayte Santiesteban pays her respects at a makeshift memorial at the Walmart in El Paso, Texas, after a gunman opened fire inside the store, killing 22 and wounding more than two dozen others. Photograph: Jim Wilson/The New York Times

We knew it would happen again. The only question was where. El Paso, Texas, and Dayton, Ohio, have joined the long list of cities disfigured by a distinctively American phenomenon – the mass shooting. On a single weekend, 31 lives were lost in an explosion of random violence.

The incidents have become so common that they begin to fade from memory. How many recall that at the end of May, 12 people were gunned down in Virginia Beach? Or the murder of another dozen people last November in Thousand Oaks, California?

The country’s inability to act in the face of such atrocities has become the story. Part of the problem is that the frequency of catastrophic episodes dulls the moral sense.

We are also treated to the rehearsal of well-worn arguments for and against additional gun control.

We need some other explanation. Part of the problem is the size of the country

Those who oppose greater measures of restriction know that time favours their cause: outrage will give way to a kind of acquiescence. El Paso and Dayton have raised the stakes only because they happened in successive days.

We now have so many cases to contend with that sub-categories are required to organise them. School shootings are among the most harrowing. If they can’t galvanise action, what can?

Apparently, the slaughter of children in Sandy Hook Elementary School in Newtown, Connecticut, in December 2012 was not enough (death toll 27), or the high school shooting in Parkland, Florida, which claimed 17 lives in February 2018. The massacre at Columbine High School outside Denver took place 20 years ago; the school’s proximity to a major metropolitan area meant that helicopters could be scrambled and the event broadcast from sky cameras. The terror was captured live. Still no meaningful action came about.

We need some other explanation. Part of the problem is the size of the country. At the state and local level, such incidents remain intimate and have the potential to provoke a significant reply, but moral reactions dissipate over distance. America can absorb these horrors because they are always taking place somewhere else.

The bottom line is that societies have acceptable levels of violence. In the US, that level is evidently not exceeded by mass shootings. Some 58 people died when Stephen Paddock opened fire on a crowd of outdoor concert-goers in Las Vegas in October 2017.

How many more people needed to die in the attack (over 800 were injured) before radical action would have occurred?

Paddock had no apparent mental illness or other grievance that could conveniently explain his actions. Even so, the only outcome was a reluctant ban on bump stocks that came into effect in March this year (bump stocks make a weapon, in effect, fully automatic; this allowed Paddock to reel off 1,100 rounds from his Mandalay Bay hotel room). Current lawsuits are contesting the ban so it may not last.

Will we see change this time, a public push that makes political inroads? The odds are slender

Meanwhile, the illusion of a “good guy with a gun” preventing or mitigating a disaster continues to hold some sway. In Dayton, reports stated that Conor Betts, the gunman, was killed by police within a minute of shots being fired. The narrative is that it could have been worse, were it not for those good officers on the scene. Yet nine people died as a result of the carnage Betts inflicted in less than 60 seconds.

In Parkland, Florida, attention has focused on charges (filed in June) against the one sheriff’s deputy on the scene, Scot Peterson, who failed to intervene and retreated to safety while the bullets ricocheted. Apparently a case of a guy who was not good enough.

In fact, the notion that this makes any real difference is false. Two mass shootings have occurred on military bases in the US where the most highly trained and armed individuals were on hand (Washington Navy Yard in 2013 and Fort Hood, Texas, in 2009 – 26 dead in total).

Of course, the great obstacle to reform is the prevailing interpretation of the Second Amendment of the US Constitution with its complex wording of a right to bear arms. The expansive approach of the current court includes semi-automatic weapons within the range of arms that can be toted legitimately by individuals.

A New York Times op-ed piece in 2018 by the retired Supreme Court Justice John Paul Stevens (who passed away last month) called for repeal of the amendment, a lost cause if there ever was one – two-thirds of the House and Senate must approve the proposed repeal before going to individual states for ratification, which must then carry by a majority of three-quarters.

But Stevens did point out something important about the limited coverage of the amendment. For the better part of two centuries, neither the federal government nor states were inhibited from enacting legislation to control guns, on the grounds that this did not infringe the amendment’s focus on the needs of a “well-regulated militia”.

The National Rifle Association (NRA) began an immensely successful campaign to interpret the amendment permissively, a view that has now become public orthodoxy to a large extent.

In fact, Chief Justice Warren Berger, a conservative, condemned the NRA in 1991 in his retirement for perpetrating “one of the greatest pieces of fraud, I repeat the word fraud, on the American public by special interest groups that I have ever seen in my lifetime”.

The NRA is currently under pressure financially and faces internal political struggles. In June it shut down its firebrand online TV service. But will we see change this time, a public push that makes political inroads? The odds are slender. Trump met surviving students of Stoneman High School after the shooting there, but the occasion had no impact. The only refuge, it seems, is forgetting.

Daniel Carey, who was raised in the US, is director of the Moore Institute, NUI Galway. He is currently a visiting research fellow at the John Carter Brown Library at Brown University, in Providence, Rhode Island