What would the ‘referendum on housing’ be about and do we really need one?

There is scope for ambitious legislative reform on housing within existing constitutional parameters, including measures aimed at reducing the cost of land 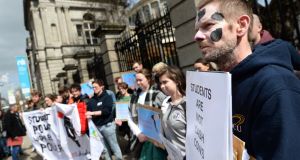 Students protesting outside the Dail over student accomadation rent rises in Dublin in 2018. Photograph: Dara Mac Donaill / The Irish Times

The proposed Programme for Government promises ‘a referendum on housing’. While that commitment has been widely interpreted in recent days as proposing a referendum on a right to housing, in fact the Programme is vague on what type of constitutional amendment is envisaged. Indeed, the commitment is not mentioned in the Housing mission, but rather in a section on constitutional reform.

Neither the nature of any proposed referendum on housing, nor its likely effects, is evident. A range of approaches other than inserting a right to housing into the Constitution remain open.

Still other approaches might focus on narrower changes, for example explicitly affirming in the Constitution the power of the State to acquire land in the public interest for less than market value compensation.

Alternatively, housing issues could be tackled solely through legislative reform. Notably, the Programme for Government undertakes to give the Land Development Agency compulsory purchase powers. It also proposes a review and consolidation of our laws on compulsory purchase.

This is badly needed and should be assisted by an ongoing review of compulsory purchase law by the Law Reform Commission.

Unlike most European jurisdictions, we do not have a single act setting out in a comprehensive way the nature of compulsory purchase powers and the procedures that should be followed where such powers are exercised.

Rather, there is a confusing patchwork of statutory powers with differing (in some cases no) procedures and conditions specified for their exercise. For example, the compulsory purchase procedures of the Industrial Development Authority and the National Asset Management Agency are different, without any obvious rationale for those differences.

Beyond such legislative reform, however, is there a need for a referendum on housing?

Property rights are protected against ‘unjust attack’ in the Constitution, but the State is empowered to restrict the exercise of property rights to secure the common good and social justice.

Measures that limit the rights of owners without taking their property, such as restrictions on rent increases or evictions, are subjected to a contextual assessment in the event of constitutional challenge. The core focus is on the fairness of a restriction considered in light of its objectives.

The courts have generally applied the Constitution’s property rights provisions in a manner that favours the public interest.

However, in three significant judgments in the 1980’s and 1990’s, the Supreme Court struck down redistributive measures on property rights grounds, with rent control the highest profile casualty. Those decisions have not been over-ruled, but nor have they been consistently applied.

In a notable divergence from international practice, the Constitution does not expressly guarantee any compensation entitlements for owners.

Nonetheless, the Supreme Court has consistently held that it ordinarily requires the payment of full compensation to owners who are deprived of their property in the public interest, for example through compulsory purchase. This includes consequential economic losses suffered by owners.

The default ‘total compensation’ rule is not rigid, as the Supreme Court has stated that it may be justifiable to legislate for less than full compensation. The grounds for any such reductions, and their impact on the rights of owners, will be carefully examined in the event of constitutional challenge. However, there is a window for their introduction.

Overall, there is scope for ambitious legislative reform on housing within existing constitutional parameters, including measures aimed at reducing the cost of land.

The Constitution’s property rights provisions turn on judicial interpretations of what is required by the common good and social justice in particular cases. This entails a degree of ambiguity surrounding the types of measures that judges will regard as constitutional in the event of challenge.

That ambiguity may explain the felt need amongst politicians for some form of referendum on housing. The Constitution has a broader political role as well as its strictly legal functions, which may also influence a constitutional reform agenda.

However, holding a referendum is costly in terms of political capital and public funds, and can delay the introduction of reforms. Particularly in times of crisis such as these, politicians should carefully consider the need for constitutional change, and its purpose and appropriate shape, before following that route.

1 Coronavirus: Unwinding of latest stage of roadmap ‘could be pushed back further’
2 Mary Hannigan: ‘Bitches Who Stood’ might be better viewed as useful allies
3 UK accuses Russia of election interference and trying to steal Covid-19 vaccine
4 Coronavirus in Ireland: Further reopening delayed amid 'worrying' rise in infection rates
5 Race against time: The inside story of Ireland’s Covid Tracker app
Real news has value SUBSCRIBE