Gabriel Scally: A virus free island is within our grasp 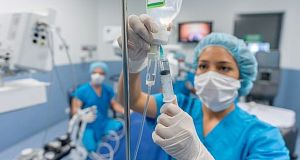 The best option for Ireland is a joint North-South initiative to hunt down remaining cases and hot spots for the virus and deal with them. File photograph: The Irish Tims

The worst is over. Hopefully, we will never again see such a terrible death toll from an infectious disease in Ireland. The response of the public, North and South, has been fantastic. When it comes to safeguarding health, the public has always proven to be more than willing do what is needed to avoid catastrophic illness.

As Shaw wrote over a century ago, the public “dreads disease and desires to be protected against it”. As we have seen, sometimes communities took the initiative themselves, with parents keeping their children out of school and heads closing schools ahead of central instruction.

Effects of the restrictions

The numbers of deaths and of new positive cases in Ireland have fallen steadily North and South. As they have reached a low level there is an understandable clamour to get back to normal. The effects of the restrictions on all aspects of life have been immense.

The damage done to businesses and individuals will have health consequences that have yet to materialise or be fully appreciated. The very restricted operation of health services will take time to restore and even longer to deal with the backlogs of routine and even urgent care that have built up.

Psychiatrists have predicted a “tsunami” of mental health problems following the crisis arising from conditions exacerbated or created by all that we have been through.

The bit that no one really wishes to hear and those dutybound to deliver the message keep saying, is that we are not done with this coronavirus yet. As long as the virus is present and is still being transmitted in our communities, workplaces and institutions we risk significant flare-ups.

Importantly, if those flare-ups are not stamped out immediately, the highly infectious nature of the virus has the potential to cause substantially more deaths and disruption.

What is needed, with great urgency, is a concerted effort to achieve a “Zero Covid-19 Ireland”. This will involve getting to zero new cases in both parts of the island and then maintaining and if necessary restoring that position. The resulting economic and social benefits would be enormous.

Arguments about distances of 1, 1.5m or 2m would be a thing of the past and our schools, theatres, arts centres, clubs and pubs could get back to enhancing our lives and reconnecting our communities. There is absolutely no reason why this cannot be achieved.

Two things about this task are very clear. Firstly, lifting a high proportion of restrictions in a country before eliminating the virus is a recipe for playing an ongoing and exhausting game of cat and mouse with this deadly foe. The consequences could be continued, and possibly massive disruption.

The global number of new cases per day continues to grow and resurgence is apparent in some places that have ended lockdown prematurely.

Secondly, as far as Ireland is concerned the task of eliminating all new cases of the virus occurring through domestic spread, ie not coming from newly imported cases, can only realistically be carried out on an all-island basis.

The endgame for Covid-19 is not yet in sight. Researchers around the world are working on the development of more than 135 separate vaccines. There is no guarantee that an effective vaccine will be found and we would be unwise to plan on that basis.

The best option for Ireland is a joint North-South initiative empowered and resourced to hunt down the remaining cases and hot spots for the virus and deal with them as swiftly as possible.

Learning the lessons from countries, such as South Korea and Germany, that are further along the path shows that the capacity to react urgently to any flare-ups must be strengthened and maintained for the foreseeable future.

Changes are, of course, needed to harmonise efforts on the island. These include details that should have been sorted out by now anyway, such as the different isolation times of seven and 14 days on either side of the Border and the fact that “shortness of breath” is a recognised and listed symptom of Covid-19 in the South but not the North. But getting a jointly agreed case finding, testing, contact tracing, isolate, and support (FTTIS) system is the big priority.

In Border counties in particular, the ability to deal with cases and contacts on both sides of the Border in a seamless way is crucial. In doing the job well speed is everything.

Serious east-west issues will arise. As the island gets close to “zero” status the focus will be firmly on stopping the importation on new cases. Agreed measures to prevent the virus being reintroduced via ports and airports will be crucial.

These are not constitutional issues – they are public health issues. They are not about sovereignty – they are about human lives and the preservation of jobs and a functioning economy.

We can revert to tribal allegiances in due course if we really want to, but in the meantime let’s get the job done. Dr Gabriel Scally is president of epidemiology and public health at the Royal Society of Medicine in , London