The Duchess of Sussex, Meghan Markle, has spoken about events following the death of George Floyd in a recorded message for students graduating from her old high school in Los Angeles. Video: Reuters 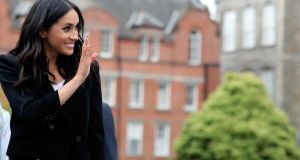 “There is only one wrong thing to say. And that is to say nothing,” says Meghan Markle on George Floyd’s murder. Photograph: Maxwellphotography.ie

In Ireland we tend to view the British monarchy as a non-stop Monty Python show. Not so in Britain. It was the queen who calmed the British people as coronavirus hammered and fissures opened in Boris Johnson’s government. A compelling image of lockdown is of the queen (94), riding out on her 14-year-old horse, Balmoral Fern. The big question is what will happen if the queen falls off her horse.

This week her second son Prince Andrew is at loggerheads with US prosecutors: he says he is co-operating with the Jeffrey Epstein investigation; they say otherwise. Kate Middleton (or her “friends”) is in a tussle about the source of a particularly nasty profile in Tatler. And the week-end blitzkrieg of royal PR – the Sky News big interview with Prince Charles and the Sunday Times big interview with Sophie Wessex (the Wessexes are 11th in the succession line) – indicates a rustling in the dovecotes not seen since Diana’s death .

The irony is there was one who could have saved them from themselves; one who, at this extraordinary time, would have been a real people’s princess.

“There is only one wrong thing to say. And that is to say nothing.” That was Meghan Markle speaking from America in the aftermath of George Floyd’s murder. She said more in her roll call of black people killed by police. But those words penetrated one complexity around the Black Lives Matter movement: the paradox that rightly asserts that white ethnic groups have no right to speak in the face of the institutionalised murder of a black man, but also asserts that to be silent is to be complicit.

Her words offer a means through the guilt: the imperative that racism be confronted. Everywhere. At all times. In all ages.

She knows. Because when all is said, she was at the receiving end of the very same brand of racism that all the Irish schoolchildren on countless programmes over these weeks have cited. The “go back to where you came from” bigotry.

Never did the monarchy need Meghan Markle as they do now. By their epic stupidity, they lost her – a smart, bi-racial woman who has always owned her blackness.

But the monarchy alone is not to blame: the establishment, both left and right, including the press, closed ranks to exclude her. The sheer volume of negative comment about Markle in the year she was a senior royal indicates a covert racism.

She was “pushy” said “palace sources”; she and Harry were “money grabbers” said the red tops, mirroring the anti-Semitic tropes of the British Labour Party. But there was more just for her. Her highlighting of poverty in developing countries was “woke”, touching her pregnant belly was attention seeking. On and on it went.

Nobody knows better than Markle that white people, by definition, can never have any idea of what it actually feels to live life as a black person. But her young husband tried. Just how much Harry gave up to protect his wife and child was there for all to see at his last public appearance at Westminster Cathedral: the lip readers picked up his shock at the treatment meted out by brother, William: “He just said ‘Hello’ that’s it!”

All British institutions now declare that black lives matter. But the Windrush generation – the Caribbeans invited to rebuild Britain after the war and recently told to go home – gives the lie to that. Meghan Markle also stands as a permanent rebuke: her supposed choice to leave in reality an enforced exile. Tallyrand’s great aphorism, that treason is a matter of dates, resonates all around.

It strikes me that there’s more than a touch of the French Revolution about these times. And that’s just the British monarchy. Perhaps the queen has need of a Tallyrand, one who can navigate monarchy as easily as revolution.

Because the tabloid tumbrils are running. For Prince Andrew over claims that he had sex with Virginia Giuffre, aged 17. Thus far, Andrew has one proven “crime” – his belated renunciation, out of skewed loyalty, of his “ill-advised” friendship with Jeffrey Epstein.

Whatever the truth of his involvement with Virginia Giuffre, it can be noted that this kind of anachronistic upper-class schoolboy loyalty is real. And not just among the upper classes. It is searingly explicated in Frank O’Connor’s autobiography, An Only Child, where he attempted to apply public school ethics to the North Mon in Cork. “I cannot peach on a chum,” he declared when challenged about a class misdemeanour – for his loyalty he was roundly trounced.

Kate Middleton’s crime, according to Tatler, is to be too middle-class, to prefer scented candles to royal interiors of threadbare carpets and dog hairs. Her real crime, ironically, is a lack of loyalty to her friend Prince Harry.

What is Prince Charles’s crime? Amid the aristo décor of bockety lamps and well-worn books, we saw an ecological prophet. But even he did not stand with Meghan.

1 Coronavirus: Non-essential travel from US set to be banned within days
2 Covid-19 incidence in the Republic set to surpass that of UK
3 ‘Our hearts are broken’ – implications of fresh lockdown sink in
4 Taoiseach tested twice for Covid-19 but excused quarantine after Brussels trip
5 As Irish economy reawakens, we find Sleeping Beauty has a hangover
Real news has value SUBSCRIBE