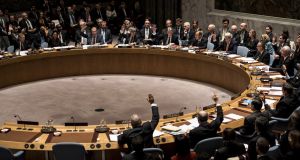 If Ireland’s candidacy is successful, it would be one of only, at most, three European Union members on the UN Security Council. Photograph: Andrew Renneisen/Getty Images

Two of the 15 seats on the United Nations Security Council will be decided tomorrow. Ireland, Canada and Norway are competing for the votes of every member of the UN. All three candidates have strong UN credentials. It is set to be a close-run thing.

The election can be compared to an international beauty contest. However, the prize will be two years of serious responsibility for global peace, security and justice. If Ireland is elected, our new government will face the challenge in New York of balancing principles and interests, the ideal and the attainable and, of course, fiercely competing points of view.

The Security Council agenda is unpredictable, but on every evolving issue ... Ireland’s voice can be a constructive and influential one

Ireland’s last term as a member of the Security Council was in 2001-2002. There are four fundamental reasons why it is right that we are now seeking a further term.

First, the global system, with the UN at its heart, which strives to manage the necessary interdependence between nations, has rarely been more threatened or more vital. The world is witnessing the spread of a narrow form of nationalism, including in countries which used to know better, driven by the dangerous illusion that self-righteous insularity can lead anywhere other than into danger and darkness. Small and medium-sized countries, including Ireland, have a particular and urgent responsibility, beyond their own borders and shores, to assert the importance of mutual respect in international relations, to defend multilateral institutions and the rule of law, and to add their voices to the case for protecting this small planet from the ravages of injustice, war and climate change.

Second, Ireland’s capacity to place our national experience and priorities at the service of the UN will be enhanced by membership of its Security Council, as we have demonstrated during our previous periods of membership. Since we joined the UN in 1955, the first big foreign policy engagement of our young state, Ireland has consistently taken a leading role on issues such as disarmament, peacekeeping, human rights and self-determination which remain central to the UN agenda. More recently, we played a central role in forging agreement on the UN’s Sustainable Development Goals. We are well positioned to help in taking forward those goals. The Security Council agenda is unpredictable, but on every evolving issue, from climate justice to humanitarian access in places such as Syria and South Yemen, Ireland’s voice can be a constructive and influential one. Covid-19, which will have a disproportionate effect on the weakest, underscores the responsibilities of the UN.

Third, if Ireland’s candidacy is successful, we would be one of only, at most, three European Union members on the Security Council. Ireland’s voice at the UN is a distinctive national one, but we also work with our European partners to advance our shared values, as well as Europe’s leadership on climate change, development assistance and multilateralism itself. The EU’s political, financial and moral support for the UN is indispensable. UN secretary-general António Guterres has described the UN-EU relationship as “an exemplary partnership”. The EU’s motto “Unity in diversity” captures well how its member states work together at the UN. Ireland values the support we receive from the EU, as we recently did on Brexit, but also the contribution we can make to Europe’s influence in the world.

Fourth, Ireland’s commitment to the UN is about seizing the opportunity to take our place confidently among the nations of the Earth. It is about demonstrating that we have achieved and consolidated our own independence in order to engage with the world rather than to hide from it. It is about Ireland’s reputation and the contribution the Irish people want our country to make.

The election campaign has already enabled Ireland to deepen friendships with many countries around the world which may be distant in terms of geography but which are close in our shared experience of history and in our resolute commitment to arguing, including through the UN, that might is not right and that the battle must not always be to the strong.

The two main foreign policy priorities of the new government here, as of any Irish government, will be to promote our interests in the EU beyond Brexit, including ensuring the continued success of the EU itself, and working with the British government in support of peace and prosperity in Northern Ireland. Success in Ireland’s Security Council campaign would significantly complement those priorities and enhance our standing in the world.

This month’s election is a very challenging one for Ireland. However, if we are successful, the greater challenge lies beyond the election. The opportunity to use our membership of the Security Council to advance the values and interests of the Irish people will also be a great and, at times, awkward responsibility.

1 Covid-19 in Ireland: Colour-coded response set to replace phases
2 Donald Trump immediately targets Kamala Harris in campaign video
3 Moving in and out of lockdown is a recipe for economic disaster
4 Brianna Parkins: Staycationing just means paying through the nose to sleep in someone else’s uncomfortable bed
5 Ireland among countries urged to consider reinstating Covid-19 restrictions
Real news has value SUBSCRIBE