Establishing his authority will be Martin’s first priority 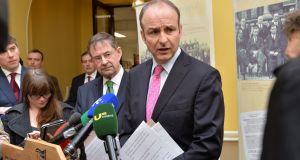 Micheál Martin: will finally achieve his ambition of becoming taoiseach but at a time when his party Fianna Fáil is sinking in the polls. Photograph: Alan Betson

Winning a mandate from their members to go into government is just the first hurdle facing the leaders of the three potential coalition parties. They will each have to raise their game by a considerable measure to have any chance of surviving the inevitable storms ahead.

Leo Varadkar had the bonus of being able to bask in the spectacularly good approval ratings revealed in the latest Irish Times/Ipsos MRBI poll, just as the coalition deal was being announced, but that raises the question as to why Fine Gael did so badly in the general election.

“I’m pleased for Leo that he is getting public recognition for his leadership in the Covid crisis but I’m angry that he has only shown his true abilities after the horse has bolted,” said one senior Fine Gael figure. “He picked the wrong date for the election, the preparations were appalling and the campaign was a disaster.”

By contrast, his handling of the Covid crisis was sure-footed and might even be described as inspiring. Once the seriousness of the threat became apparent he took decisive action and, more importantly, communicated the scale of the threat to the public and generated a mood of solidarity that was vital to make the lockdown successful.

That mood was summed up in a child’s poem about the lockdown read out on Lyric FM a few weeks ago which contained the lines: “And thank God we have Leo, not Boris or Trump”.

The question facing Varadkar now is how, back in government as tánaiste, he will be able to contribute to a similar level of public support for the difficult process of exiting the lockdown and coping with the cost.

Another if less important question is whether, in his new role as tánaiste, he will be able to sustain anything like the level of support shown for Fine Gael in the poll or whether in government the party will slide back to the dismal rating it achieved in the general election.

For Micheál Martin the conundrum is the opposite. He will finally achieve his ambition of becoming taoiseach but at a time when his party is sinking in the polls and the man he is replacing has managed to generate a record level of public trust. Establishing his authority as taoiseach will be his first priority and that will not be easy given the scale of the task ahead.

Martin will have to demonstrate leadership skills in office as that will be crucial to rebuilding the image of Fianna Fáil as a competent party of government. Maintaining a distinctive image will be a challenge but, after nine years in opposition, a spell in government offers the best opportunity to do that.

In the past Fianna Fáil’s great strength was its ability to bring people along with it while it was in government. That gave it the platform to win re-election on a regular basis. It is a political skill that always eluded Fine Gael and it will be a vital ingredient in making the three-party coalition a success.

For Eamon Ryan, the process of attempting to bring his party into government has been a daunting experience. After the February election it was widely assumed that, having led his party to a record 12 Dáil seats, he would be in a strong position to set its future direction.

Instead, as often happens in politics, great success can be every bit as dangerous as failure for a leader. Ryan has had to move very carefully in an effort to bring most of his new TDs with him along the path to government.

Some of them are clearly not enamoured with his leadership and regard him as every much part of the establishment as Fine Gael and Fianna Fáil.

As far as implementing a Green agenda goes, there was never a better time for the party to be in power

As if that wasn’t enough, he is also facing a leadership challenge from his deputy Catherine Martin and there is no guarantee that even if the members vote to go into coalition he will remain as leader. All of that adds a huge element of instability to the potential government and Ryan will have his work cut out to maintain control even if he survives the leadership challenge.

The ability of the coalition to govern effectively will depend on a high level of trust between the three party leaders. If Ryan is removed from the leadership it is difficult to see how cohesion will be maintained in the face of the difficult decisions ahead. Still, the likelihood must be that if a majority of Green party members endorse going into coalition they will stick by the leader who has brought them there.

As far as implementing a Green agenda goes, there was never a better time for the party to be in power. They have extracted serious commitments from the other two parties on climate change while the current moves by the EU to implement a green deal mean that there is an effective guarantee they will get a lot of their priorities implemented.

As they weigh up their options, Green members could do worse than ponder the wise saying of Indian Nobel literature prize winner Rabindranath Tagore. “You can’t cross the sea merely by standing and staring at the water”.

1 Coronavirus: Unwinding of latest stage of roadmap ‘could be pushed back further’
2 Mary Hannigan: ‘Bitches Who Stood’ might be better viewed as useful allies
3 The downing of a minister: How Barry Cowen went from hero to zero in just twelve days
4 Race against time: The inside story of Ireland’s Covid Tracker app
5 Max Schrems case: EU court rejects data transfer tool
Real news has value SUBSCRIBE