Cliff Taylor: The next programme must send a message by planning to do less 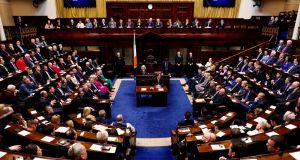 The first sitting of the 33rd Dáil in Leinster House this week. Photograph: Maxwell Photography

Sooner or later, two of the three big parties will get into negotiation on a new programme for government, trying to drag in a couple of the smaller parties along the way. Fianna Fáil and Fine Gael are to have exploratory talks next week – and indeed the exchanges in the Dáil on Thursday night between Micheál Martin and Mary Lou McDonald mean their two parties now look like unlikely bedfellows, though who knows what will emerge in the weeks ahead.

The last time around a programme running to no fewer than 157 pages emerged, full of rhetorical flourishes and including a mix of common sense, political guff and – on my count – more than 600 separate policy commitments, some achieved, some not and some so bland that you would find it hard to decide.

If programmes for government are to amount to more than putting a few manifestos in the blender, then more focus is needed. This is particularly the case this time – for two reasons. The first is that the election has thrown up two big priorities to be tackled – housing and health – and climate change needs to be added as a third.

The second is that experience has shown that these issues are hard to tackle, requiring new approaches and a lot of money – and any programme for government needs to outline in some detail how progress will be made and how it will be paid for without exposing the public finances.

Some of this is about communicating – and meaning – that particular effort and significant resources are going to go into a few key areas. Because I suspect we can’t do everything at once. The 600-plus commitments in the last programme covered everything from the development of a plan for the health services, to commitments to promote the greyhound industry and regional museums , grants for mats for slatted cowsheds, our commitment to nuclear non-proliferation, a study on the Western Rail Corridor, moves to abolish the USC and a new sailing vessel to promote cross-Border youth co-operation. And so on.

If we keep ticking off the boxes to keep every constituency happy, we won’t get anywhere. If we keep doing the same thing, we’ll get the same result. The next programme for government needs to send a message by focusing on exactly what the new government intends to happen in the three key areas and what its plan will be. All the rest can come later in departmental programmes.

And it is also about being realistic about the constraints. The outgoing Government oversaw a period of strong growth and benefited from a big surge in corporation tax. It is thus worth noting that Paschal Donohoe told the Dáil on Thursday that “this Dáil is responsible for a small, open economy at a moment of great change ... what we may take for granted at present we might not be able to take for granted in a number of years’ time”. There is no point having some kind of fantasy programme that wishes away these risks, or fudges how the bills will be paid.

Another key constraint will be finding the skilled labour to work on all the project and house building planned. The previous wave of building in the early 2000s was fuelled by an influx from Eastern Europe – but countries like Poland are now seeking to hold on to their own employees, offering decent wages and plentiful employment.

We can surely make progress on the key policy areas of climate, health and housing – but it will mean doing less, spending less and giving less focus to other areas. It won’t all go smoothly, because it never does. And it will require a political and institutional focus and a willingness to change the way we do things, which will not be to everyone’s liking.

The tone of the next government is going to be different – framed in large part by the general election campaign and demands for a changed approach. Part of the discussion will inevitably be about whether we should keep the public finances in surplus and put cash aside for the “rainy day” or spend more, now. Some wise heads believe that next month’s UK budget, which will see a big increase in spending and a looser approach to the public finances, will add to pressure to do something similar here. And of course borrowing has never been cheaper, even though our national debt remains high.

The flip side of the argument is that we have seen how quickly the public finances can turn – and while Minister Donohoe and the Department of Finance forecasts have baked in some future decline in corporate tax revenue, this remains a key risk – as does a messy exit of the UK from the EU trading regime at the end of this year. Not a lot of time was spent during the election campaign discussing these risks, or how to protect the economic gains made over the last few years, underlined by the extraordinarily strong growth in jobs, confirmed by new figures during the week.

Getting the balance right in the new programme for government will thus be a big challenge. It needs to do what it can to set the next administration up for success in meeting the key priorities – which means focus and avoiding a long wish-list. But is also needs to be realistic about the constraints – that economic growth and tax revenues may well not be as buoyant in the term of the next government as they were during the last. Because the last thing we want to do is end up needing to hike taxes or cut spending as the economy slows. No pressure then.