World View: In pushing for digital regulation, such firms hope to shape it in their own interests 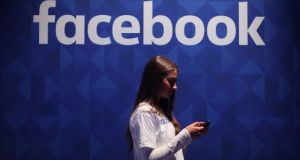 Mark Zuckerberg finds his company blamed for facilitating the subversion of democracy, genocide, the destruction of whole industries and self-harm among young people – among other things. Photograph: Niall Carson/PA Wire

In the late 19th century, the titans of American business in the Gilded Age – men such as John Rockefeller and Jay Gould – argued that as pioneers in a new world, where they were founding new industries and opening a continent to vast new possibilities, they should be left unshackled by the sort of laws and regulations that applied to another era. Their vast wealth was simply a result of the laws of evolution in the industrial society, and any attempt by politicians to circumscribe their power would violate their rights and lead to economic ruin. Besides, business at these industrial frontiers was too complex for the authorities to understand, let alone control.

But for a class that amassed its fortunes not only through entrepreneurial pluck and but also thanks to no small amount of fraud, bribery, cartel-creation and exploitation of low-paid workers, the backlash was inevitable. And so came federal laws to limit cartels and monopolies and such public opprobrium that some of the barons turned to philanthropy and public-minded enterprise as a way of regaining their respectability.

Does this sound familiar? At the frontiers of today’s creative economy, the modern tech giants benefitted from a similar state of lawlessness and, as the writer Shoshana Zuboff has pointed out, have used variations on the same arguments as the “robber barons” to stave off the regulatory state. Such interference would stifle innovation, violate speech and property rights and put a brake on economic activity, they argued. In 2010, Eric Schmidt of Google said the company needed no regulation because it had in-built incentives to “treat its users right”. The same year, Facebook founder Mark Zuckerberg suggested that privacy was a dying social norm.

That was a decade ago. Today, no global gathering is complete without a Big Tech leader appearing on stage to urge governments to regulate their business. Last year, Zuckerberg called for new laws in four areas: elections, harmful content, privacy and data portability. He reiterated the message in the Financial Times this week, saying he didn’t think “private companies should make so many decisions alone when they touch on fundamental democratic values”. At Davos last month, the chief executives of Microsoft and IBM both spoke positively about regulation of artificial intelligence. Google chief executive Sundar Pichai even supported the idea of a temporary ban on facial recognition.

No doubt those who run the Silicon Valley giants must feel that they’re in over their heads. Having set up Facebook as a lark in his college dorm in the early 2000s, Zuckerberg finds his company blamed for facilitating the subversion of democracy, genocide, the destruction of whole industries and self-harm among young people – among other things. But it’s a stretch to think that as market dominance increases, a company’s appetite for new external constraints rises with it.

Rather, the about-turn is a recognition that public opinion has changed. Damaging scandals and a growing public awareness of their intrusive surveillance-based business models have resulted in a shift in public opinion and a sharpening political focus, in the European Union and the United States, on the untrammelled power wielded by these platforms.

Even if she doesn’t win the Democratic nomination for the US presidency, Elizabeth Warren will have made a lasting difference to public debate in the US by bringing the idea of tech regulation into the mainstream. Driven by Warren, who is surrounded by key thinkers on tech anti-trust, ideas that were confined to the fringes of left-wing debate just a few years ago, such as the break-up of Big Tech, are not only being adopted by fellow Democrats but are being examined by government officials as well.

The EU also has the same monopolies in its sights. A digital strategy published this week spoke of forcing the firms to share their data, and the European Commission is working on setting new rules for how platforms such as Google, Facebook and Twitter police online content and disinformation.

In positioning themselves on the right side of the regulation debate, the firms naturally hope to shape that debate in their own interests. This is a common pattern. One of the reasons Philip Morris supported restrictions on tobacco advertising was that, with 50 per cent of the US market, it felt the new rules would block competitors eating into its market share. So sceptics will argue, for example, that when Google argues for regulation of facial recognition, it is trying to steer the conversation away from any threat to its underlying model of appropriating private information for its commercial ends.

There is a delicate balance to be struck. Facebook is not wrong to argue that serious questions on freedom of speech are in play, and states must be careful not to create such burdensome duties that no small entrants could hope to perform them, inadvertently entrenching the power of the big incumbents. Ultimately, consumers too will have to accept that the public good will involve some private cost of them, and that constraints on the platforms will require them to sacrifice some of the convenience they take for granted in their digital lives.

1 Coronavirus: Surge in cases hits Ireland's nursing homes as number of clusters jumps to 38
2 Ireland has strategy to ‘break the chains’ of coronavirus - WHO’s Mike Ryan
3 Cheltenham faces criticism after racegoers suffer Covid-19 symptoms
4 No lockdown: An Irishwoman on Sweden’s unusual response to coronavirus
5 We need to cancel the Leaving Cert and give students predicted grades
Real news has value SUBSCRIBE