To have any chance of progress, a fair economic wind will be essential 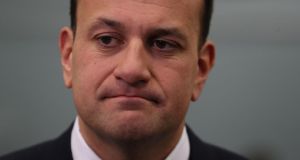 Taoiseach Leo Varadkar. ‘Galvanising a new government to deliver what needs to be done would be a huge task for Micheál Martin and Leo Varadkar – and they will both know it.’ Photograph: Liam McBurney/PA Wire

There was a lot of talk in the election campaign about what would be delivered – but very little about how it would be delivered. But the challenge of delivering change is now a key factor, as the talks on forming a government start going around in circles. Because everyone knows that whoever is in power is going to face a really difficult and risky job, with very high stakes.

This is one reason why putting together a Fianna Fáil-Fine Gael plus perhaps the Greens coalition will be difficult, though of course not impossible. Anything seen as a continuation of the status quo in tackling the key areas such as health and housing will leave an open goal for Sinn Féin as the main Opposition party to shoot at. I mean you wouldn’t even talk to us after the election , they would say and this would be a powerful political message to those who feel excluded.

For a Fianna Fáil-Fine Gael coalition to have any chance of success, politically, it would have to look, feel and act differently from the outgoing government – or from any government we have seen in recent years. There would be no talk of leaving it to the market to deliver. The price of failure, for all the parties involved, would be enormous.

Fine Gael and Fianna Fáil have just been given a yellow card by the electorate and for now are looking a bit tired and beaten. Galvanising a new government to deliver what needs to be done would be a huge task for Micheál Martin and Leo Varadkar – and they will both know it. The strong economy, signs of increasing supply in the housing market, stable or falling prices and signs that pressure on rents might be easing a bit are, of course, positives in the calculus. And you can make an argument that a Fianna Fáil-Fine Gael-led coalition could close off some support for Sinn Féin were they seen to make enough progress. But you can see the really big risks as well.

The calculus is different for Sinn Féin, who may feel that in government they could deliver enough progress to underpin their increased support among voters. But for them, too, delivering on their promises will be hugely challenging – especially in housing, where it would require a massive ramping up of local-authority building. It is not the ideology of the Sinn Féin position which will have attracted most voters, who don’t care who builds houses, once they are available and affordable. Delivery would be everything.

And because it involves higher spending and big tax changes, Sinn Féin’s programme carries a higher level of risk and is more exposed if there is any slowdown in the economy, or any fall-off in revenues in areas such as corporate tax. Yet Sinn Féin’s approach received more support from voters – and this in turn will change the way economic policy is conducted, whether the party is in office or not.

Whoever is in government, it is going to feel very different from the last few years, with a big move to boost State-funded house-building and deeper government involvement in other key areas such as childcare. The message will be: “We are the government and we are here to help.” The Sláintecare programme for the health service also requires a further injection of State cash. There will be big questions about where the responsibility of the State begins and ends in areas such as housing. And all this will require more spending and higher taxes.

To have any chance of progress, a fair economic wind will be essential – and can’t be guaranteed. And much greater pace in decision-making and implementation is essential. Fine Gael established the Land Development Agency to manage State land for housing in September 2018. But by the time the Dáil was dissolved the legislation establishing it, and required for it to operate fully, was still not passed.

Whoever is in government next time simply cannot afford this length of delay in moving things along. And speed means knocking heads together and seeing off the usual interest groups who either try to stop change or demand a bigger stake of the pie as the price of co-operation.

The only way this can work, I think, is by persuading the wider body of voters that there are a few key priorities – a couple of key areas where the new government intends to lead a national drive, underpinned by a clear and communicated strategy. Economist Mariana Mazzucato of the University of London refers to these as national “missions” – akin to the public-private co-operation which allowed the United States to put the first man on the moon. Is this too idealistic a notion for our fractured politics?

If it is just business as usual, then health service reform will be killed off in the usual running battles with consultants,GPs and hospital management and housing reform will be stymied by local authority rows, planning challenges and a lack of joined-up thinking – and actions.

I suspect we are all going to be fed up with all the parties trying to outpromise each other on “change” in the dance that is now under way. The challenge of actually delivering this change is one thing making the forming of a government really tricky. At least two of the three big parties all want to be in government – Fine Gael probably prefers Opposition – but they will all be very nervous too of the challenge that awaits. Rock, paper, scissors to decide who is taoiseach?