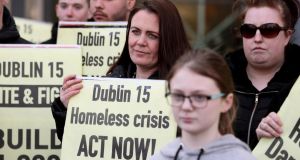 Protesters attend a “Homes for all” rally outside Fingal County Council’s offices in Dublin on Thursday. Photograph: Brian Lawless/PA Wire

Housing has been the big issue of the general election campaign and the problems facing renters and aspiring home-buyers have been widely discussed.Whoever is in office faces a big challenge – in tackling homelessness, increasing supply and so on. But there are really significant longer-term issues in the background, too. The clearest is our ongoing attachment to home ownership – specifically the three- or four-bed semi-d – not only as a way of life but also as the normal financial pathway which people follow, providing them with an asset in later life.

There are – and will always be – people who prefer to rent rather than buy. This is common, after all, in some other European Union countries. But the vast majority here see renting as a temporary state – somewhere to live for a few years before they buy. And there is evidence to support this.

Renting has moved from being a temporary state – typically for young people moving 'up to Dublin' for the first job, to a kind of semi-permanent state for many

A survey conducted in 2018 for the Department of Housing by the Government’s economic service of 750 renters found that almost nine out of 10 of them wanted to buy a house at some stage. Owning a house – and the stability this gives while possibly planning for having a family and eventual retirement were seen as important. The plus sides of renting, such as choice and being more mobile “were not widely held to be major reasons to rent,” the survey found.

Most said that they were renting not because they wanted to, but because they could not afford to buy. On average they were prepared to pay 20 per cent more to buy. Nor is apartment living seen as a long-term state. The study noted that “respondents indicated a marked preference for three- and four-bedroom houses.” And they were prepared to undertake significantly longer commutes as part of moving from being renters to owners.

Since the survey was taken, strong growth in house-building in the commuter counties around Dublin has continued. This is contrary to the national spatial policy of having people live nearer city centres and at least close to public transport links. I know a couple planning to move from Swords – served by commuter links, services and in time a metro – to a village about 10km away, so they could afford a new and bigger property. The distance isn’t far but they will switch to an entirely car-based lifestyle.

The stated goal of policy is to have people live nearer their work and services, to cut down on journeys and emissions and avoid the need for long car-based commuters. A study has shown that people living outside the M50 and commuting into Dublin can have carbon emissions four times above those living inside it. Yet property sales in the commuter counties remain sharply on the rise, according to new data from myhome.ie.

These trends go way beyond the general election campaign. It has focused on the – vital – issues of ending homelessness and who should be responsible for the required increase in house-building in the next few years, as well as how renters and buyers are given financial assistance. These issues will be a key focus for whatever administration takes power. But beyond that lie the bigger questions of meeting the housing needs of a rising population, how and where we will live in the years ahead, what element of State subsidy is attached to this and how it contributes to living more sustainably.

The change in how we live in recent decades has been striking. Home ownership has declined since its peak in the early 1990s, most notably among 25- to 34-year-olds. Among this group, more than two out of three households owned their house – either outright of via a mortgage – in 1991, compared with less than a third in 2016. The flip side is the increased numbers of 25-34-year-olds renting from private landlords – up from 15 per cent of 25-34-year-olds in 1991 to more than 50 per cent by 2016. Renting has moved from being a temporary state – typically for young people moving “up to Dublin” for the first job, to a kind of semi-permanent state for many.

Younger people will rightly ask why they should have to settle for a different way of living than the traditional model. I’m not sure of the answer

Some kind of Irish solution to this Irish problem may in time emerge. But there are big questions. How much effort should we put into developing a long-term rental sector which can begin to offer the kind of stability which young people want? Other big cities typically have much larger rental sectors and giving people security of tenure at less than the cost of mortgage would be essential.

Or is it still all about owning a home – with rental as a transitory state? And in either event are Irish people willing to make the trade-off of living in smaller accommodation – not necessarily apartments – closer to city centres if this avoids a long commute? The legacy of the boxes thrown up as apartments during the pre-crisis years looms large here – and a lot of effort will be needed in developing attractive alternative models to the traditional semi-d with a front and back garden.

Younger people will rightly ask why they should have to settle for a different way of living than the traditional model. I’m not sure of the answer. And it does go beyond housing, because the lack of pension provision for many people in the private sector also limits life choices. Buying a home has been a traditional route to accumulating wealth – and in turn helping the next generation to purchase via inheritance. If people end up with no house and no pension, then we will really be in trouble.

The new government will have more urgent tasks in the housing brief in its early days. But sooner rather than later we need the longer-term vision. Because there isn’t much point setting out on a journey if you are not quite sure where you want to end up.