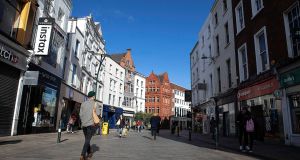 ‘When a Covid-19 vaccine emerges, the mother of all marketing and reassurance jobs will be required.’ File photograph: Damien Eagers/PA Wire

In the winter of 1967 as foot and mouth disease ravaged animal herds in the border region of Wales and England, Ireland trembled in fear.

To keep out the highly infectious animal plague, the taoiseach Jack Lynch begged Irish emigrants not to come home for Christmas. As many as 70,000-80,000 of them complied in a selfless act that must be the very definition of patriotism. For the emigrants and their families here, the loss of that much anticipated Christmas homecoming at a time when access to home travel was rare and expensive was a heartbreak, a sacrifice that up to a few months ago must have been almost unimaginable to younger generations accustomed to flying on European city breaks at a whim.

But for the generations who remember 1967, infectious disease was not something that merely threatened to eviscerate herds, livelihoods and the national economy. In that Ireland, as social historian Dr Ide Milne of Carlow College has written, the ravages of infectious disease were a visible part of our classrooms and neighbourhoods.

The children with damaged heart valves from rheumatic fever, the polio victims locked into callipers in special boots to help them walk, the children isolated by hearing or sight loss because their mothers had contracted rubella during pregnancy or because the children had caught measles (which can also bring on fits, brain damage and death).

Well within living memory, tuberculosis had terrorised the country, killing thousands of children and adults each year, annihilating families along with other diseases such as diphtheria and whooping cough. The least of the damage were the facial scars often left by chickenpox. In many households with ageing relatives now living in fear of Covid-19, these old tragedies and communal terrors still scar the heart.

Maybe this is why surveys on likely vaccine take-up tend to trigger certain age groups. On Monday, the media went large on an Irish Pharmaceutical Health Association-commissioned survey of Irish people’s feelings about a possible Covid-19 vaccine. Eight months into a pandemic where hundreds of thousands of young people in particular are being laid off work, distressing stories of long Covid are gathering force and Covid is running out of control around Europe, just more than half – 55 per cent – of all respondents said they would take a vaccine if one became available. One in three were unsure. And one in eight would turn it down.

The age groups most likely to turn it down were those aged 18-34 and 25-34, with 18 per cent of 19 per cent respectively saying they would refuse it.* They would reject a vaccine knowing that it would at least help to ameliorate the economic and psychological devastation wreaked on their own and other generations by a terrible disease; possibly save their granny from an untimely death or even from home detention for the remainder of her days, and maybe save a young friend from months, perhaps years of, disabilities of various kinds following a bout with Covid-19. Only a point separates the 18-24s from the 25-34s, so there is no muddying of stages of maturity here.

It’s an astonishing figure. Reams of sympathetic coverage have been devoted to the frustration and deprivation suffered by this particular age group, perceived to be carrying the can for the self-indulgence and excesses of older generations.

Yet one thing the older generations lined up for almost unquestioningly were the brand new vaccines that promised lives free from old terrors for all, and they passed that herd immunity on to succeeding generations.

A survey conducted by Maynooth University and Trinity College Dublin last April found that 65 per cent of Irish people would definitely accept a vaccine for themselves or their child. It sounds positively cheerful compared with the IPHA result. But even that figure caused Maynooth associate professor of psychology Philip Hyland’s jaw to “hit the floor”.

So what lies at the root? Complacency? Entitlement? The lovely sense of invincibility of youth? A baked-in certainty about the harmlessness of Covid-19?

In a thoroughly unscientific home survey, I canvassed about 25 under-35s and a few older people about their attitude. More than one-third were definite nos. Four gave a definite yes. That left a definite majority for the sceptical “maybe” group, offering a variety of takes on what was basically a preference to wait a month or two and see how others react to the vaccine.

Most are worried it will be rushed and not properly tested. They reason that they wouldn’t want the first round for themselves. One believes it should be given to older and vulnerable people first “if that helped to reduce numbers – and if they really needed everyone to take it then I probably would too”.

Another notes sudden swarms of anti-vax material landing in Facebook accounts from long-ago acquaintances with alarmist hashtags suggesting forced vaccinations and testing. A young man believes there is a logic to the scepticism, citing the “bad history of rushed vaccines” and in particular, cases of narcolepsy caused by the swine flu vaccine (this is Pandemrix, on which a High Court hearing in the second lead action of about 100 cases is due shortly).

He anticipates a troubled process in the release of the Covid-19 vaccine, a resurgence of the anti-vaxxer movement, then reminders and recollections of mass outbreaks such as smallpox, followed “hopefully”, he says, by “a return to the 1960s, where enough people are just like, f**k off, people were dying in the streets, take your medicine”.

One thing is clear. Even when a vaccine emerges and an extraordinary distribution programme is assured, the mother of all marketing and reassurance jobs will be required. This week the Wall Street Journal reported that the Trump administration had hit on the wheeze of offering Santa Claus performers a deal: promote a Covid-19 vaccine and they would get early access to it. The plan has been called off.

In the end, it may come down to an homage to the selfless generations of 1967 and an appeal to patriotism.