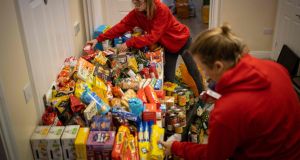 Members of staff organise food donations for vulnerable families at the Cooking Champions food bank in Grange Park, north London. Rahsford’s campaign has put the British government on the back foot, revealing an apparent dearth of compassion at its very core. Photograph: Tolga Akmen/AFP/Getty

Most questions that concern the moral duties of our politicians come with complicated answers.

How far should the state intervene in its citizens’ private lives to protect public health? Is a wholesale lockdown a worthy trade-off for the reams of knock-on effects it has on mental health, the survival of small businesses, and an increased prevalence of domestic violence? Is it right to prioritise immediate safety concerns at the expense of the economic futures of young people?

Hard questions invite hard conversations; conversations which are not well suited to one of our primary spheres of public discourse – social media.

Rashford has put the government on the back foot, revealing an apparent dearth of compassion at its very core

But recently, emerging from the rubble of tedious online shouting matches over lockdowns and travel bans is an exception: Marcus Rashford’s renewed campaign to provide disadvantaged children across England with free school meals over the winter holidays.

The wildly popular footballer was successful in forcing a government U-turn over the summer on this exact question. Now as winter approaches, and the British government holds steadfast to claims they will not provide poverty-stricken children with free school meals over the winter break, his campaign has started afresh.

Naturally it has captured the zeitgeist. And the British government’s refusal (so far) to back down has left them not so much with egg on their faces, but instead appearing so incompetent and lacking in compassion that even Scrooge himself might raise an eyebrow.

Key to Rashford’s campaign was the groundswell of support it received across social media. Platforms that do not necessarily trade well in nuance and complexity are unsurprisingly well suited to campaigning, especially on questions as clear-cut as this one.

The beauty of Rashford’s heroic campaign is that even if there were legitimate questions over whether free school meals are the best way of helping impoverished children, the very act of asking those questions bestows the interlocutor with a callousness few normal people possess.

Because “should the government fund meals for disadvantaged children in the middle of a pandemic?” appears as one of those rare moral questions that invites a glaringly simple response. And by casting the issue as a simple function of human decency, Rashford has put the government on the back foot, revealing an apparent dearth of compassion at its very core. The government’s inability to see this PR crisis looming, then, appears all the more baffling.

But the source of this optics nightmare, as commentator Iain Martin identified, finds itself rooted in a suspicion of social media and its adverse effects on the broad ecosystem of the traditional (or indeed, old-fashioned) media landscape.

How do we maintain righteous anger over serious moral failings when we are constantly pulled in different directions over every new revelation and story?

Since the advent of social media the speed of the news cycle has increased tenfold and plenty of stories – that may have otherwise stuck – have come and gone as mere flash-in-the-pan moments. What causes outrage and hysteria one week (the Irish Government’s screw up on predicted grades comes to mind) is, by many at least, forgotten the next.

The Rashford debacle then landed squarely (and unnecessarily) on the British government’s shoulders via a mistaken belief that the story would fade as fast as most; vanishing into the ether as soon as the electorate hit upon the next thing to be cross about. But Martin got it right when he wrote that the problem with this thinking – that most stories disappear within a matter of days – “is that this is true right up until the moment it is not.”

The problem here, however, is that a scepticism of social media and a disdain for its impact on the traditional media landscape is not a bad thing for any of us to possess.

As social media has utterly upended the way we engage with news, treating viewers with a barrage of uncurated information, an array of psychological challenges arise: How do we determine the significance of any given story when every day fresh outrage is generated over the latest headline? How do we maintain righteous anger over serious moral failings (free school meals, for example) when we are constantly pulled in different directions over every new revelation and story?

There is little incentive for platforms like Twitter and Facebook to meaningfully solve these problems for us – their capital comes from encouraging users to indulge in base instincts to confect outrage and dichotomise the world into black and white, bulldozing over nuance and complexity we may otherwise be granted with.

Precisely because of this, social media is the most powerful tool of the campaigner. When the right person (a young, articulate and admirable footballer) hits on the right issue (feeding disadvantaged children) at the right time (as we head into the economically ruinous second wave of the pandemic) the pitfalls of social media as a tool for public discourse fade into a secondary concern.

And that Rashford’s campaign may well have benefitted from social media’s preponderance to elide complicated issues into simple binaries does not change the fact that, in this rare instance, the moral imperative is clear as day.

The British government’s mistake was not in holding scepticism over social media’s largely deleterious effects on public discourse – but in somehow being hoodwinked into believing Rashford’s campaign would not spurn such a long-lasting and perhaps insurmountable PR disaster. The mistake was in failing to identify such a simple question of basic compassion standing right in front of them.