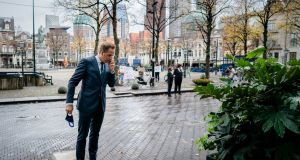 Hugo de Jonge, Dutch minister of health, arrives for the plenary debate in the Lower House about the developments surrounding the coronavirus, in The Hague, The Netherlands on Wednesday. Photograph: Bart Maat/EPA

A four-week “partial lockdown” imposed in the Netherlands a fortnight ago in a bid to control a second wave of coronavirus has been extended until “well into” December – as the number of new cases crashed through the 10,000-a-day mark and left hospitals again struggling to cope.

The Netherlands is the EU’s most densely populated country and the latest wave has been spreading faster than the first, with a record 10,353 new cases in the 24 hours to Monday, marking an increase of nearly 30 per cent week-on-week.

The increase stands in sharp contrast to neighbouring Germany, which is more than five times the size of the Netherlands but where new daily cases at the weekend stood at 11,242 – though even there the number of occupied intensive care beds is doubling every ten days.

As the pressure mounts, four Dutch patients were transferred to Germany over the weekend.

According to the Dutch public health institute, there were 67,543 positive Covid-19 tests in the week to Tuesday, up 22 per cent on the week before – though considerably less than the 60 per cent increase the week previous to that, most likely because of the tightening restrictions.

Bars, cafes and restaurants have been closed again since October 13th. There’s a ban on the sale of alcohol after 8pm. And social mixing is restricted, with a maximum of three people allowed to visit any household in a 24-hour period.

‘Every bed is full’

Even so, prime minister Mark Rutte, in a televised address with health minister, Hugo de Jonge, on Tuesday evening, warned that the country was now entering a critical period where another economically damaging total lockdown and more deaths were “the real spectre” to be avoided.

Mr Rutte – who’s facing a general election in March and who didn’t support the wearing of masks until October despite polls showing two-thirds of the public wanted tougher action – added: “All possible scenarios are on the table. Stick to the rules. Do not look for the edges.”

Mr de Jonge said modelling showed that the peak of the second wave was now approaching. “We have to get our infection rate down if our health service is not to be inundated.”

Some hospitals are already in trouble. The Albert Schweitzer hospital in Dordrecht, for example, has limited even coronavirus patients to those in “life-threatening condition”.

“This runs totally counter to our sense of duty”, a spokesperson said, “but every bed is full.”