Incidence in Derry and Strabane area continues to decline 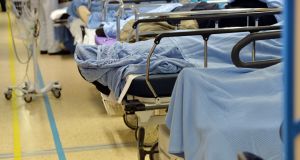 The North’s Department of Health has recorded nine more deaths and 840 new cases of Covid-19 in its latest daily bulletin.

On Wednesday, there were 352 Covid patients receiving treatment in Northern Ireland hospitals with 44 in intensive care units and 37 being ventilated.

As pressures grow on the health service, the department reported that there were 13 intensive care unit beds available.

For the first time in a number of weeks the Derry and Strabane area did not record the highest number of cases per 100,000 over seven days.

The average seven day figure for all of the North also is beginning to slowly drop.

Minister for Health Robin Swann said the warnings that the health service was facing its “most difficult winter ever” were coming true.

In a media briefing on Wednesday, Mr Swann said health service staff “were already exhausted” before this second surge and now needed public support to try to limit the spread of the virus.

Dr John Maxwell, a leading consultant in emergency department care in Belfast, said he could not remember when the pressures and demands were as “tough as this before” on the health service.

He said all elements of the service were “working at their absolute max at the minute” and were “tirelessly” trying to deliver the best care they can in “really challenging and difficult circumstances”.

“We are very concerned that this could be one of the worst winters that the NHS in Northern Ireland will experience or is going to experience, unless we act to change and to do something different and to get control of the situation,” he said.

Dr Maxwell thanked the public for the efforts made so far to curb the spread of the virus. “Please support the public health message that is out there, that you have to absolutely abide by what we’re trying to do. Otherwise you will have an NHS that is overwhelmed. We will not get through this unless we do work together.”

The North’s chief medical officer Dr Michael McBride said that Northern Ireland was facing the “longest, most difficult winter that I think any of us has experienced”.

However, he did not expect that the health services on both sides of the Border would be seeking assistance from each other to deal with the Covid pressures.

“None of us will be found wanting if colleagues in the Republic of Ireland need assistance from ourselves or vice versa,” he said.

“We will not be found wanting and that mutual aid will be provided if it’s requested and if it’s required. But I don’t anticipate that being the case,” he added.