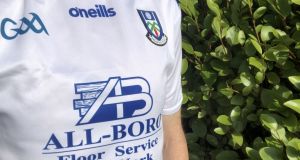 As part of the annual triumph of optimism over experience recently, I ordered a new Monaghan GAA jersey in advance of our championship season (which could well be over by the time some of you read this).

And I knew from memory that a “medium” size would probably cover me.

But in these days when we can’t try things on in shops any more, I sought the O’Neill website’s guidance and was taken aback to learn that, based on chest and waist measurements, I was now a “small”.

If true, this was a first in my adult life. I am exactly 6ft tall (in the old money), and weigh about 12 stone (76kg) before meals. In the Ireland I grew up in, that was considered substantial on both counts.

It was enough that your mother would look at you now and again with a mixture of pride and wonderment that she had raised such a strapping example of manhood.

It is true, as readers may know, that I have taken to running in recent years.

So I plead guilty to being thinner than I once was. But the basic framework is still there. And even at 76kg, I would never be mistaken for John Treacy.

The type of jersey I was ordering, by the way, is called “player fit”.

This appears to be a euphemism because, having started at “small”, the six sizes available on the website progress to “medium”,“large”, “XL”, “2XL”, and “3XL”. I know they can do wonderful things with material nowadays but, even in Lycra, some of those would seem to be stretching the definition of player a bit.

Anyway, I ticked the box for “small”, with misgivings. And a few days later, the shirt arrived in the post. Sure enough, it’s a perfect fit. No doubt I should be pleased, but now I also feel like Norma Desmond in Sunset Boulevard when someone suggests she “used to be big”. I am big, as Norma said. It’s the jersey that got small.

It’s a good thing for Monaghan supporters that today’s Ulster Championship first round game is not taking place in Breffni Park.

That was traditionally the “graveyard” of Monaghan football and proved so again as recently as last year. We’re nervous enough going there in May or June, when the tombstones of our ancestors are at least well lit, without having to visit the place on Halloween.

As it is, circumstances are ominous. Tonight’s “blue moon” would seem to forebode a Cavan victory (unless it’s more of a white moon with blue trimmings).

And news that it’s the first full moon of any kind on Halloween night “since 1955” invokes a dark decade when Cavan were still winning All-Ireland titles, never mind breaking their neighbours’ hearts in Ulster every year.

On the plus side, from our viewpoint, the last of their five All-Irelands was in 1952, so that decade also marked the beginning of a decline from which they have not emerged since. But we would never be confident that a supernatural comeback is not imminent, especially this year. Halloween is when Michael Myers tends to turn up too.

Speaking of horror films, there is one minor omen in our favour. Many years ago, when I was small the first time, I went to school with a kid called Pat McEnaney.

There were lots of McEnaney families in the area, so they needed nicknames to tell them apart.

His was no exception and, as I was reminded again recently, is recorded on the inside back cover of my Leaving Cert history book.

On our last day at school, I got all my classmates to autograph this. Pat was the only to use his family nickname, signing himself as “P Slasher”.

And the cheering part of the story now is that his brother Seamus is the current Monaghan manager. If today’s game turns out to be a Slasher movie, I trust we get to write the script.

The Ulster Football Championship aside, but still with horror films, today’s scary events also include the International Vampire Film and Arts Festival.

It’s usually held in Transylvania but this year it’s all online. And the bit I most like about it is that, by way of a voluntary admission fee to the web event, viewers from all over the world are instead being encouraged to make a local blood donation, whenever circumstances allow. More details, including access to all the live (and undead) events, are at ivfaf.com.