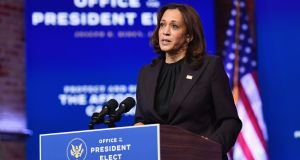 It took 232 years for the first black man to take office as president of the United States of America. Now,four years after Barack Obama’s final term came to a close, we are witnessing another unprecedented first – vice-president-elect Kamala Harris will not only be the first candidate of Indian descent and the second black person to take a presidential position, but the first woman elected to the White House.

Harris isn’t alone – she joins the ranks of a number of female trailblazers achieving significant milestones in world politics such as New Zealand’s Jacinda Ardern and Sanna Marin of Finland. In Ireland, we can but gaze longingly at the progressive leaps other countries are taking as they shatter their own glass ceilings.

The absence of women at a key Covid-19 decision-making meeting recently was an uncomfortable moment for the Government. It served as a reminder of the continued lack of proportional gender representation in our administration.

In a statement which was intended to quell criticism, the Government stated that “three powerful women” were present at the meeting. Many were quick to point out that all three of those women work for men, and none had a vote or say as to whether or not Level 5 restrictions would be signed off. Since when is the presence of a few women in the room the gold standard of inclusion?

In Northern Ireland, both the first minister and deputy first minister positions are held by women, and three of the five main parties are led by women. You’d be forgiven for thinking women are in a better position here, but that leadership trend doesn’t trickle down the political ladder, and in Northern Ireland women face the double threat of both institutionalised misogyny and sectarianism.

Women are demonstrably underrepresented in government in most – if not all – countries worldwide. According to IPU global data however, Ireland is ranked an alarming 93rd – not a position to be proud of. The UK is ranked 40th, itself a far-from-ideal position, yet still leaps and bounds ahead of Ireland.

The contributing factors have been the subject of scrutiny over the decades: candidate selection, social and economic opportunities, lack of leadership, persistent gender-based discrimination – all substantial barriers discouraging women from entering public office.

Politics by its nature can often times be adversarial, but in Northern Ireland political institutions have been shown to be particularly toxic, rife with sectarianism, whataboutery, sexism, and little progress.

Political parties can be slow to address issues of gender discrimination and sexual harassment; women continue to leave party politics citing bullying and discrimination as the cause – one example of many indicative of the region’s wider issues of societal stagnation.

A recent survey by the Belfast Telegraph showed that more than a quarter of female MLAs have been sexually harassed during their political life, 70 per cent have had sexist remarks made to their face by men, and 75 per cent have experienced sexism on social media. Not the most alluring of environments by any standard.

We live in a time where social media eats hungrily into our daily lives, giving people little reprieve from the onslaught of negative, sexist, and over-all abusive comments.

Women are often subjected to regular attacks on these platforms about their appearance, their worth, and their position; feeding the flames of misogyny and propagating gender-based discrimination. Harris, days into her history making position, is already fielding targeted abuse for being a women in power.

I, too, have been subjected to regular abuse online, most often by men – some of whom have now spent years of their lives mounting aggressive and malicious campaigns against me, trying as best they can to beat me back under that parapet. I’ve been ridiculed for being a ‘difficult woman’ and am often the subject of sexist and derogatory comments about my appearance.

But it doesn’t stop there, this targeted abuse levied toward female representatives has escalated at times to threats of violence and rape. That women are still so consistently subjected to such a shameful spectrum of torment illustrates how little progress has been made societally in embedding the principles of respect and equality, and in dismantling the outdated model of what a woman’s place is.

Perception plays a huge part in advancing participation. For many women seeing women succeed instils confidence. Political parties and the media have a part to play in advancing the positive impact of women in politics. The habitual practice of placing powerful men in the spotlight by default needs to be consciously and actively broken.

From candidate selection, to promotion, to bringing more women into debates and interviews, all these combine to dissolve archaic preconceptions of what being a woman means. The media, in turn, has a duty to report the achievements of women in the manner in which those same types of achievements made by men are consistently reported – fairly and without bias.

We need more balanced representation of all our demographics in positions of influence to help bring about positive change, but to achieve this we will have to break down ingrained physiological, psychological, and institutional barriers. The election of Kamala Harris, at a particularly divisive point in American history and global politics, gives us hope that these barriers can be broken.

Emma de Souza is a citizens rights campaigner and commentator