US and Iran remain bound in fatal embrace

World View: For Washington and Tehran hardliners, peace would be admission of defeat 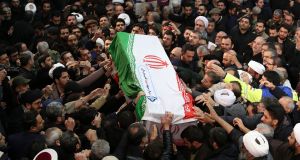 The assassination of Qassem Suleimani has cemented one of the strongest symbiotic relationships in politics: that between conservative hardliners in the United States and Iran.

These sworn enemies, whose reciprocal hostility has persisted undimmed since the 1979 revolution, are also locked in a mutually reinforcing embrace. What the radicalised clergy in Tehran provide the US Republican Party is a cartoon bogeyman on which to project neo-conservative dreams.

In return, the mullahs can count on the Americans to spurn any moderate, reformist voices who challenge the regime at home.

In the short term, of course, the loss of Suleimani is a powerful blow to the clerics who control the Islamic Republic. No single figure, with the exception of supreme leader Ayatollah Ali Khamenei, has had greater influence over Iranian security and foreign policy over the past two decades.

In 2002, George W Bush named Iran as a member of his Axis of Evil. Still, a year later, Iran quietly offered to strike a grand bargain

Suleimani’s de facto role as chief regional diplomat, head of external intelligence and conduit to a network of proxy forces across Syria, Lebanon, Yemen and Iraq made him close to indispensable.

Yet, in the battle for supremacy between hardliners and reformers within the regime, it’s clear who benefits most from Trump’s decision to kill Suleimani. Two weeks ago, the regime was challenged by popular protests over falling living standards.

That was claimed as vindication by hawks in Washington, who had argued that Trump’s tightening of sanctions would put greater internal pressure on the Iranian regime and perhaps even cause it to implode.

In killing Suleimani, however, the Americans have neutered the protest movement, many of whose members have returned to the streets this week to join in a mass outpouring of grief – a rare show of unity that the country’s leadership will interpret as legitimation of the interventionist regional policy that Suleimani personified.

That unity will not last forever, but for now the Islamic Republic’s martyrdom narrative is revived and the supreme leader’s domestic standing has been enhanced.

The regional fallout has also worked to Tehran’s advantage. In recent weeks, anti-Iranian street protests had broken out in Iraq and Lebanon, and Suleimani had been shuttling across the region in an attempt to shore up beleaguered allies.

The fallout from the American drone strike has quietened that dissent and delivered Iran an unexpected windfall in the form of a vote by Iraqi MPs to order the 5,000 US troops from the country. All of a sudden, the position of the US in Iraq looks far more tenuous.

This has been a recurring pattern in US dealings with Iran since the overthrow of the Shah. The Islamic Republic’s hybrid constitution, combining elements of theocracy and democracy, set up an in-built tension between those who saw it as a transitional stage on the road to a full imamate and others who hoped it would evolve into a more democratic system.

The US 'is ready to embrace peace with all who seek it', Trump said this week in the aftermath of an assassination that implied the very opposite

The reformists were ascendant in the 1990s, when they won landslide majorities in local, parliamentary and presidential elections. Under then-president Mohammad Khatami, more than 100 reform Bills were passed by the legislature and there seemed a real prospect of normalisation of relations with the West.

Khatami was partly undone by a failure to keep his promises and resistance from the clerics. But instead of encouraging him, a US Republican-led administration pushed him off the cliff.

In 2002, then US president George W Bush named Iran as a member of his Axis of Evil. Still, a year later, Iran quietly offered to strike a grand bargain. It would accept intrusive nuclear inspections, help stabilise Iraq, tell Hizbullah to back off and co-operate in the fight against al-Qaeda.

In exchange, it wanted the US to guarantee that it would accept Iran as a regional power and abandon its policy of regime change. Bush, riding high after a quick rout of Saddam Hussein’s forces in Iraq, dismissed the offer.

Thereafter, the reform movement collapsed and the conservatives reasserted themselves. In 2005, the hardline populist Mahmoud Ahmadinejad won the presidency and set about rolling back Khatami-era reforms. The state grew more authoritarian and more brutal in its repression of dissent.

It was not until the nuclear containment deal agreed between the US, Iran and other powers in 2015 that another chance at normalisation presented itself. In Iran, the deal was a reformist project championed by the pragmatic president Hassan Rouhani but loathed by hardliners, who argued that America could not be trusted to keep its promises.

When Trump breached the Obama-era deal by reinstating sanctions in 2018, the hardliners in Tehran were proved correct. Once again, Washington professes to want a negotiating partner in Tehran while simultaneously pulling the rug from under those most receptive to the message.

The US “is ready to embrace peace with all who seek it”, Trump said this week in the aftermath of an assassination that implied the very opposite. Yet for the hardliners in the driving seats in Washington and Tehran, peace would be an admission of defeat. So they remain bound in their fatal embrace, marching in lock-step towards the abyss.