Why Citizens’ Assembly could lead way for new era for women

A key outcome from the Assembly would be a new vision on how we as a society recognise the value of care to all of society. 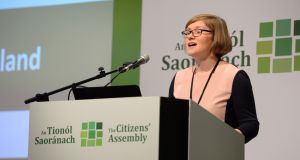 Today, we celebrate Nollaig na mBan, or Women’s Christmas, a day when traditionally women get together and celebrate their Christmas while men take over the housework and care work. In recent years, it has also become a day to celebrate women’s achievements and to highlight what still needs to be done to achieve full equality.

There has been much progress for women over recent times, including most memorably the repeal of the Eighth Amendment from the Constitution. Yet there is a long way to go.

It can set the agenda for programme for government negotiations, ensuring that women’s equality is a priority for all political parties and politicians in 2020

This year, at the start of a new decade, Nollaig na mBan takes place just before 99 citizens come together for a newly established Citizen’s Assembly on gender equality. The Citizens’ Assembly comes at a crucial time for Ireland, as we face into the prospect of an early spring general election. By recommending clear deliverable actions, it can pave the way for a new era for women’s equality with regard to care, economic equality and women in leadership in every sector of society. It can set the agenda for programme for government negotiations, ensuring that women’s equality is a priority for all political parties and politicians in 2020.

The task before the assembly is a significant one – they are charged with discussing the remaining barriers facilitating gender discrimination in Ireland, with a particular emphasis on care. We know from our experience with deliberative fora that when people are presented with evidence, facts and the experiences of those who are most affected, they tend to make sensible and concrete recommendations for a possible way forward.

As the largest national women’s organisation in Ireland, the National Women’s Council will be presenting the views and experiences of women to the Citizens’ Assembly. From a better sharing of care work, to tackling poverty and low pay for women, and low numbers of women in national and local government and at senior level in business, there are many areas we need to improve on before women achieve full equality.

A key outcome from the assembly would be a new vision on how we as a society recognise the value of care to all of society. Currently, the unequal responsibility of care between women and men impacts women’s decisions in every sphere of life. The fact that women do the vast majority of care in Ireland, from childcare to elder care, affects women’s earnings, and in turn is a big cause of the gender pay gap and resultant gender pension gap.

Outdated and sexist language could be replaced with a new, gender inclusive clause that recognises and gives value to care and care work in our society

The Citizens’ Assembly offers a unique opportunity to discuss care, those who give and receive care, work-life balance, and the role of the Constitution in recognising care in all its forms.

We know that Article 41.2 of the Constitution, which refers to women’s “duties in the home”, is discriminatory and sexist and needs to be removed. It is also one that invokes much debate on broad issues around care and its role and value in society.

A positive, concrete recommendation from the assembly would be the proposal for a new referendum on Article 41.2. The outdated and sexist language could be replaced with a new, gender inclusive clause that recognises and gives value to care and care work in our society.

Another crucial area for discussions will be early years care and education. As director of the National Women’s Council, I have been saying for many years now, that Ireland has the highest childcare costs in Europe. This is not changing, and significant investment in the Early Years is needed to bring us into line with 1 per cent of our GDP, as recommended by Unicef. We also need to ensure a living wage for childcare workers, the majority of whom are women. As things stand 60 per cent of early years workers earn less than the living wage.

Particular attention will need to be given to the situation of lone parent families. The vast majority of these families are headed by women and they remain the household type most at risk of poverty and family homelessness.

In addition to providing safe and secure housing, we will need to ensure our social welfare payments deliver a minimum essential standard of living and that labour market activation programmes are adapted to the needs of lone parent families.