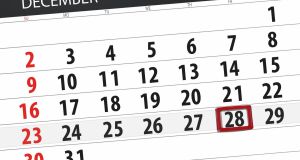 I touched on the subject of “Childermas” here a couple of weeks ago in connection with one of the more eccentric English Christmas carols, which I have heard only once anywhere, at a service in St Patrick’s Cathedral.

The carol originated in Latin as Puer Nobis Nascitur “(Unto Us is Born a Son“). But among the lines from the translation that amused me was the following: “This did Herod sore affray,/And did him bewilder,/So he gave the word to slay,/And slew the little childer.”

What seemed funny about that was not the event it describes, of course, but the fact that among all the high-flown Victorian poetry, the translator, having backed himself into a corner that only a rhyme for “bewilder” would get him out of, had resorted to the classic Hiberno-English plural of child (typically heard here after the collective noun for five or more children – a “clatter”).

Well, today (December 28th) being Childermas, or the Day of the Holy Innocents as it is better known in Ireland, I hope I can be forgiven for returning to the subject at slightly more length.

As admitted previously, the carol writer did have the partial excuse that “childer” was common in England too once, in past centuries: hence Childermas, or Childers’ Day, another of its old names there.

But the term’s gradual migration to this island was confirmed by its appearance in an atrocious 19th-century poem called Tomorrow, by Alfred Lord Tennyson. A lament for a beautiful colleen who goes mad and dies, that was written entirely in what Tennyson considered conversational Irish-Enlgish, and thereby incudes the lines: “An’ Shamus O’Shea that now has ten childer, hansome an’ tall,/Him an’ his childer wor keenin’ as if he had lost them all.”

Perhaps he wrote it on December 28th, because whatever we call it, this was long considered one of the unluckiest days of the year, very inauspicious for work. Here’s my late colleague, Diarmaid Ó Muirithe, in a 1999 Words We Use column, on its lingering reputation in England: “In Yorkshire no important affair was taken in hand on Childermas Day. Going on a sea voyage or entering a house never previously entered was considered madness. To this day, many of the housewives of Cornwall refrain from washing anything, and I’m reliably informed that the news of a Childermas Day wedding in Newquay was greeted by the old-timers with gasps of astonishment and pity.”

On a purely personal note, I can never hear the word “Childer” without thinking of a former President of Ireland of (nearly) that name. This is in part because I met him once, a long time ago, when a child myself.

It so happens that I grew up in a political household in Monaghan, where my father was a Fianna Fáil councillor. And one night circa 1970, our home was visited by a man said to be the “Minister for Health” in an organisation called “the Government”, which we understood to be something big in Dublin.

Bedtime was postponed long enough that evening for me and other members of the clatter to be presented to this VIP, who was also the local TD (parachuted into Monaghan, I think, to attract Protestant voters who, by tradition then, would not otherwise touch Fianna Fáil with a 40-foot-pole).

Thus it was that I shook the hand of a man who, half a century earlier, had shook the hand of his father, shortly before Childers snr would also, by way of forgiveness, shake hands with each member of the Free State firing squad that was about to execute him. I’m not sure how much of that I appreciated at the time, but either way the event left a big impression.

Remembering it again while writing this, I found myself reading up on how the older Childers, English-born and once a fervent unionist, had ended his days an Irish republican martyr. I was reminded that it was at least in part the influence of his American-born wife, Molly.

And within minutes of seeing that – in a coincidence simultaneously frivolous and bordering on the supernatural – I also noticed somewhere that a horse called Molly Childers, whose existence had hitherto escaped me, was running, imminently, in the 1.50 at Kempton Park, at a predicted starting price of 10-1.

So, God forgive, I dropped everything and headed for the nearest bookmakers to invest in the inevitable victory. But I didn’t quite make it in time, which was just as well. The bad luck of Childermas had set in 12 hours early – the horse finished only fourth. Suitably chastened, I have now decided to donate the money to Childline.

1 BBC’s Fergal Keane treated for post-traumatic stress disorder
2 Former SDLP deputy leader Seamus Mallon dies aged 83
3 Corey Taylor: After 20 years in Slipknot we are all beat up
4 Brexit is a collective English mental breakdown
5 Hilary Fannin: What I wish my spouse and I had done the morning of our wedding
Real news has value SUBSCRIBE