Una Mullally: A collection of gay PR machines is not a Pride parade 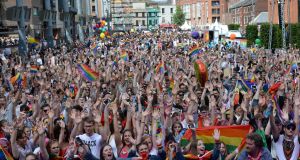 Una Mullally: ‘In recent years, it has been heartening to see a younger LGBTQ+ generation take up the mantle of interrogating the logic and ethics of acceptability politics and corporate nonsense.’ Photograph: Dara Mac Donaill/The Irish Times

This weekend is meant to be the biggest in the LGBT calendar in Ireland, the culmination of the Dublin LGBTQ+ Pride festival in a huge march through the city centre.

Pride is also an important revenue stream for bars, performers, DJs, drag queens, club promoters, and the lively network that makes up the capital’s gay scene. When the lockdown came into effect, among the first to innovate were Ireland’s drag queens, hosting shows and drag competitions online, selling tickets and asking for viewer support to keep them afloat. The gay scene is an ecosystem that almost completely exists in a live environment, and as we know busy bars that don’t have the resources to pretend to be restaurants, nightclubs, and festivals have been shuttered for the foreseeable.

1 Minister for Agriculture Barry Cowen sacked by Taoiseach
2 Miriam Lord: Martin blooded as Taoiseach after wielding axe on Cowen
3 Gardaí found naked man on a cross being whipped in Dublin club, court told
4 Coronavirus: Pub reopenings in danger as NPHET expresses serious concerns at case growth
5 David McWilliams: ‘Ireland is three decisions away from being a perfect country’
6 My aunt never told us that Gran passed away with no will
7 A US food writer moved to Ireland. Here’s what he found
8 Barry Cowen sacking ‘not good news for the Government early on’ - Coveney
9 Ryanair and Aer Lingus cut flights as travel restrictions continue
10 Taoiseach says Garda document on Cowen case ‘not quite as portrayed’
11 Thomas Byrne denies being source of Barry Cowen drink driving story
12 Two in custody after Ryanair flight to Dublin forced to divert
13 Normal People: Paul Mescal is a Greek god in a GAA tracksuit, says Lenny Abrahamson
14 Man (47) charged over damage to Luke Kelly statue in Dublin
15 US passengers fly into Dublin: ‘I’m here for six days. I guess I’ll have to stay inside’
16 ‘Holy trinity of taoisigh’ to have up to 17 advisers, Dáil hears
17 Man jailed for road rage incident outside Dublin shopping centre
18 Girls rescued after being trapped in barn deliberately set alight
19 Galway reopening: ‘This is hitting tourism hard’
20 Will Revenue come calling with tax bill if inheritance tax threshold falls?
21 Owners of Cork shopping centre sue for €30m after car causes fire
22 Barry Cowen profile: Minister’s apology to the Dáil settled matters only temporarily
23 ‘Mother Mooney’, the Mayo woman who campaigned for justice for her wronged son
24 Covid-19 laces granting of Irish citizenship with danger
25 The Chicks: ‘We were accepted because we made them a lot of money, but they didn’t like us’
26 Newspaper editor says rights breached by warrant to seize phone
27 Many people identified as close contacts refusing to come forward for Covid-19 testing
28 Political row brewing if Ireland loses its appeal on Apple
29 Racing regulator happy with screening protocols despite high-profile breaches
30 Thandie Newton names names. Will Hollywood punish her?
31 Fintan O’Toole: Jack Charlton allowed us to accept the English part of our Irishness
32 World population set to shrink after 2064, claims new study
33 Ghislaine Maxwell denied bail on charges of luring girls for Jeffrey Epstein
34 Gerry Thornley: Munster will make for interesting case study when rugby resumes
35 Back with our old friends at eir – and nothing seems to have changed
36 Alain Rolland to step down from World Rugby position
37 Marian Keyes: ‘I thought when I stopped drinking my life was over. It was just beginning’
38 Leo Varadkar says Barry Cowen has more questions to answer
39 Game Changers: Gary O’Toole took a stand when others turned their heads
40 50 best Irish albums of all time – in order
Real news has value SUBSCRIBE