I grew up in the shadow of two powerful patriarchies, the Catholic Church and the police. Both institutions attracted an element of warped, sadistic people. 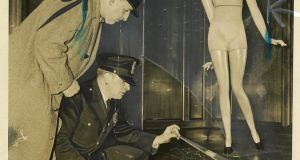 I was sheltered in my demure blue school uniform and saddle shoes, watching the world burn. The National Guard slaughtering students at Kent State. The Chicago police billy-clubbing yippies at the ’68 Democratic convention. Soldiers in Vietnam getting denounced as “baby killers,” and radicals vowing to “barbecue some pork” and spill the blood of “pigs”.

When our school newspaper published an anti-Vietnam War cartoon, the principal, a nun, dumped all the copies into the incinerator. As a 16-year-old in 1968, I found it hard to balance hating the Vietnam War and wanting racial justice with being part of a family, baked in patriotism, taught to revere uniforms.

As Bill Clinton wrote in that infamous 1969 letter, the cool kids were all about “loathing the military”; I was making pocket change by ironing my brothers’ Coast Guard uniforms, being careful to make sure the creases were sharp.

I never told classmates about my father’s long stretch as a police detective. I just talked about his second career, after retirement, as a special assistant to a senator and congressman. When it was time for the father-daughter lunch at Immaculata, I didn’t sign up.

As an Irish immigrant with little formal education, my father had worked terribly hard to afford that fancy girls’ school. But I didn’t tell him about the lunch. I don’t know if it was the cop thing or because he was older and didn’t seem that into raising a teenager. (The day I was born, the other cops at roll call teased him about becoming a new father at 61.)

As it turned out, one of my dad’s closest friends was the speaker at the lunch and called him to find out why he wasn’t there. My dad, hurt, asked my mom why I didn’t want to take him. And that is something I’m ashamed of.

In the wake of 9/11, I was relieved that people were able to see the heroic side of police officers and firefighters. Celebrities began inviting firefighters to their lobby Christmas parties in tony Upper West Side apartment buildings. But by the next year, that fad was over.

Now come calls to abolish the police. Once I would have tried to blame bad apples. But the grotesque spectacle of blacks being regularly executed for living their lives is completely indefensible. I grew up in the shadow of two powerful patriarchies, the Catholic Church and the police. Both institutions attracted an element of warped, sadistic people. Instead of rooting out those dark forces, the institutions protected them, moving bad priests to another parish and bad cops to another precinct.

The police and the church are arbiters of right and wrong, yet they let a poisonous culture grow and conspired to shield those doing wrong and hurting innocents.

My heart aches for all the good cops – particularly black cops – who are anguished, and for their families in this season when the streaming of N.W.A.’s anti-police anthem is surging; when police shows are getting axed as “copaganda” and even Olivia Benson is cancelled; and when protesters in D.C. hold aloft signs reading “EAT THE RICH AND THEIR PIGGIES TOO,” and “ACAB” (All Cops Are Bastards) is spray-painted all over the pavement.

As we rein in and reimagine how a police force should work, we should avoid that word “all”. I loved my dad, but decades passed before I took the time to learn about his 40 years on the D.C. force.

Finally, my sister gave me his scrapbook. There’s a picture of him with president Calvin Coolidge, getting awarded the Medal for Bravery. There’s another pic where he’s in his fedora, guarding Franklin D. Roosevelt at a ballgame as he throws out the first ball.

My dad caught an escaped killer who hurled a flatiron at him and broke his nose. He disarmed a wife in a courthouse who shot her cheating husband and said she regretted only that she hadn’t been able to get “the other woman” too.

Over the racist objections of his captain, he wanted to give blood to save the life of a black man wounded during a series of armed hold-ups. The man had fired point-blank at my father, but the gun jammed. Only then did my dad return fire.

He wasn’t big on bloodshed. He transferred out of the homicide department in short order and threw up after watching my cat have kittens. In 1947, he faced down a Ku Klux Klan leader burning crosses on the lawn of the only Jewish resident in a Maryland town.

In 1954, when he was in charge of Senate security, he raced over to the House and wrestled the gun from one of the four Puerto Rican nationalists who shot round after round onto the House floor, wounding five congressmen. (You can still see the bullet hole in the table that Republicans use to give speeches.)

Amid the clippings in his scrapbook about his exploits catching “highwaymen” are pasted some poems – one about Irish mothers, one about the evils of whiskey and several that allude to the fact that police officers can die at any moment and leave behind their families.

So, on this Father’s Day, I’ll say what I should have said a long time ago: I’m proud of you, Dad. – New York Times