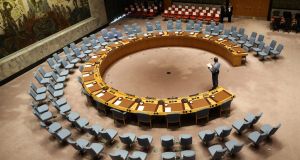 On June 17th, the Irish campaign for a non-permanent seat on the United Nations Security Council proved victorious as 128 member states cast their votes for Ireland. Since July 2017, diplomats at the Irish Mission to the UN in New York have led a colourful and provocative campaign at a cost of €840,000 to compete against Norway and Canada for one of two seats assigned to the “Western Europe and Other group”.

But having been met with cynicism at home, and in an atmosphere of tension around international co-operation in light of the Covid-19 pandemic, what exactly does Ireland hope to gain by this expensive experiment in internationalism?

The campaign for the seat was launched with a flashy concert and a series of high-profile events in New York two years ago, featuring Irish icons such as former president Mary Robinson and U2 frontman Bono. A provocative video showcases Ireland as a small nation which has struggled for independence, faced down the challenges of colonisation, migration, famine, religious tensions, war and division while developing into a strong, peaceful, independent, and reliable multilateral partner. There has been calculated effort to highlight Ireland’s cultural resonance with other small nations in particular, while driving home the main campaign message: that in the current international climate the UN is more important than ever, and Ireland shares an empathy with other small powers.

However, what remains unclear from this slick campaign, is why Ireland, or indeed any other small nation, would want a non-permanent seat on the security council. The campaigns for votes for candidates for the non-permanent or “elected” seats are expensive in terms of resources and time spent organising events, lobbying other UN delegations for votes and demonstrating the value of a country’s performance at the UN to other diplomats, rather than to the general public.

It is evident from Ireland’s campaign that considerable strategic importance and prestige is attached to a non-permanent position, which is still considered to be an important seat at the table of the world’s most exclusive club. This is despite the limited power of this role. While there are 10 non-permanent seats alongside the five permanent members (China, France, Russia, the UK and the US), their role has few competencies.

Non-permanent members can negotiate the agenda of the council, bring issues on behalf of other members, hold the presidency of the council as part of the rotation and generally participate and vote in the debates on peace and security issues. However, becoming a non-permanent member does not change the amount of power a state can wield at any one time, it simply allows them to practise that power in a different forum.

In recent years, there has been an effort to change the perception of this role from one of “prestige” to one of “responsibility”. From this perspective, non-permanent members would be expected to contribute more to the UN system as a whole. Ireland has already sought to fulfil this vision, in recent months committing to quadruple funding for the World Health Organisation (WHO) up to $10 million (€8.9m) and supporting a two-state solution for Palestine, in a bid to strengthen ties with Muslim nations.

At the same time however, the UN as a whole has been chastised for its handling of Covid-19 and scepticism about effective multilateralism is widespread. The WHO and the security council have been singled out for criticism for acting too late or ineffectively to stop or slow down the spread of the pandemic. In addition to these structural problems, tensions between the permanent members, especially China and the US, have further stalled progress on a range of issues before the council, not least the conflict in Syria.

Yet, the pandemic has also demonstrated how essential multilateral co-operation is in tackling global crises. For smaller nations especially, being able to wield influence within the international system is increasingly important as the global scale of such challenges means that states cannot effectively respond to such problems alone.

Ireland’s professed commitment to the UN will certainly be tested by membership of the council at a time when many of the values that underpin Ireland’s internationalism, such as respect for human rights and the promotion of multilateralism, are under siege.

While it is evident that the UN and its functions are more important than ever, it remains to be seen whether or not we are on the cusp of a new turning point which will either demonstrate the vitality and legitimacy of our international institutions or lead to a breakdown of the current system.

Either way, the next two years will be a demanding and defining moment for smaller nations at the UN. Now, Ireland has an opportunity to demonstrate the true potential of this role.