Trump makes a deal with Kim – but what exactly is it?

North Korea gained most from summit with vague promise of denuclearisation

US President Donald Trump and North Korean leader Kim Jong-un signed a 'comprehensive' document following a historic summit aimed at the denuclearisation of the Korean peninsula. 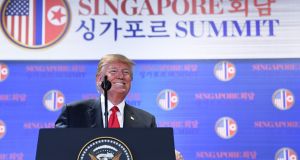 As the two men strode out on to the red carpet in front of a wall of North Korean and American flags, a new chapter of world history was written.

The meeting between Donald Trump and Kim Jong-un marked an extraordinary turnaround for two leaders who just a few months ago exchanged barbed insults, appearing to push the world closer to nuclear war.

The Singapore Summit is likely to be the defining foreign policy achievement of Trump’s presidency, taking its place alongside historic encounters such as Ronald Reagan’s 1986 meeting with Mikhail Gorbachev in Reykjavik and Richard Nixon’s visit to China in 1972.

But whether it ultimately will be a success remains to be seen.

As the US president departed Singapore on Air Force One, many questions were left unanswered.

Following five hours of meetings – which included a 40-minute bilateral meeting between the two leaders and a wider lunch meeting involving aides from both sides – the two leaders signed a joint statement. This centred around four main points which both countries committed to implement “fully and expeditiously”: a commitment to establish new US-North Korean relations, to build a “lasting and stable” peace regime on the Korean Peninsula, a restatement of North Korea’s commitment to “work toward complete denuclearisation of the Korean peninsula” in line with the April 27th inter-Korean summit, and a pledge to recover the remains of American servicemen in North Korea and release prisoners of war (a commitment that will be welcomed by Japan).

But it was during Mr Trump’s freewheeling hour-long press conference that more details of their meeting emerged. In particular, the president announced a cessation of joint military exercises by the United States and South Korea which he termed “war games”. The development is a major concession to Pyongyang, and appeared to take South Korea by surprise. A spokesman for the South Korean foreign ministry said: “at this moment, the meaning and intention of president Trump’s remarks requires more clear understanding.”

It remains as unclear as ever how the United States will achieve and verify its ultimate goal of 'complete, verifiable, irreversible denuclearisation'

His description of the US military exercises which have been taking place for decades as “very provocative” and “inappropriate” is also unprecedented for a US president. The Pentagon had previously indicated that the military exercises were non-negotiable.

Similarly, the wording of the joint communiqué is vague and contains little detail. North Korea’s commitment to “work toward complete denuclearisation of the Korean Peninsula” is little more than a reiteration of April’s Panmunjom declaration. Further, the statement contains no timeline or verification demands.

With an estimated 141 different sites devoted to the production of non-conventional weapons scattered across North Korea, it remains as unclear as ever how the United States will achieve and verify its ultimate goal of “complete, verifiable, irreversible denuclearisation” in the words of secretary of state Mike Pompeo.

Mr Trump’s somewhat effusive praise for 34 year-old Kim has also raised questions. Asked if he had raised human rights abuses with Mr Kim, Mr Trump replied: “He is very talented. Anybody that takes over a situation like he did at 26 years of age and is able to run it and run it tough,” though he added that he did not say he was “nice”. Later, in an interview with Voice of America, he described Kim as a “smart” man who “loves his people.”

Mr Trump’s praise for a despot who sanctioned the murder of many of his own people and family contrasts with the language used by the president and his advisors about Canadian prime minister Justin Trudeau a few days ago. Trump advisor Peter Navarro said there was “a special place in hell” for the Canadian leader while the president called him “dishonest and weak.”

It will also likely be of little comfort to the family of US student Otto Warmbier who died last year shortly after his release from North Korea, despite Mr Trump saying in his press conference that Warmbier “did not die in vain”.

As US officials stay behind in Singapore to continue discussions and Mr Pompeo travels on to Beijing for talks, Trump’s critics argue that North Korea walked away with more than the United States from the meeting – a summit with the sitting US president without surrendering anything more than the promise of “working towards” complete denuclearisation. Mr Trump denied the claim. “I think the meeting was every bit as good for the United States as it was for North Korea,” he said, highlighting his talents as a deal-maker. “My whole life has been deals. I have done great at it.”

In the short-term, most Americans are willing to give Mr Trump the benefit of the doubt. The old Winston Churchill phrase “to jaw-jaw is always better than to war-war” rings true as last summer’s tensions recede.

But for others, the experience of Churchill’s contemporary Neville Chamberlain also looms large. The world will be hoping that the lessons of 1938 – when Chamberlain returned from the Munich peace talks declaring “peace in our time” only to see Europe descend into the horrors of the second World War the following year – will not be repeated.

4 Irish in Australia: ‘It’s scary here, not able to visit home at the drop of a hat’