The Irish Times view on the Singapore summit: A triumph – for Kim Jong-un

Donald Trump has been snookered by a more strategic opponent

US President Donald Trump and North Korean leader Kim Jong-un shook hands and smiled as they started a historic summit in Singapore on Tuesday (June 12), just months after they traded insults and threats of nuclear war. 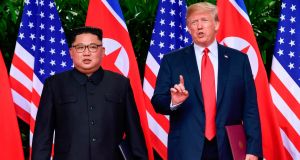 Trump’s warmth towards Kim, though consistent with his apparent affinity with autocrats everywhere, was nonetheless shocking. Photograph: Susan Walsh/AFP/Getty Images

Kim Jong-un must scarcely believe his luck. Less than nine months after he established North Korea as a nuclear power with a long-range ballistic missile capability, the young despot has, through his summit with Donald Trump in Singapore, attained a level of global credibility his father and grandfather could only have dreamed of. But that’s the least of the gifts Trump has given him. The summit has tightened the dictator’s grip on power, reduced the threat of a US-led attack and raised the prospect of new flows of financial aid. Most astonishingly, this has cost Kim virtually nothing.

Trump once appeared to be a hardliner on North Korea. Late last year, he taunted the “rocket man” in Pyongyang and threatened to visit “fire and fury” on the country (Kim called Trump “the dotard”). That bellicose rhetoric has given way to the most accommodating position any US president has taken towards the Kim dynasty. Showcasing his potent blend of high narcissism and tragic ignorance in Singapore, Trump proclaimed the meeting a “very important event in world history” and claimed Kim had given his “unwavering” commitment to denuclearisation.

Trump’s warmth towards Kim, though consistent with his affinity with autocrats everywhere, was still shocking. The man who “loves his people, loves his country”, as Trump put it, oversees one of the most repressive regimes in the world – one that kills its enemies and tolerates no dissent.

What Trump sought to portray as a shift in Pyongyang’s position is nothing of the sort. In fact, all the concessions are on the American side. And they’re big concessions. The US will provide security guarantees and will cease joint military drills with Seoul. In exchange, Kim provided merely a vague pledge to work towards denuclearisation – language every diplomat will recognise as a standard-issue fudge. Trump appears to believe that when Pyongyang talks about denuclearisation, it means giving up its own arsenal. What it actually means is a vague aspiration for a nuclear-free region – one that would include the removal of the US nuclear umbrella over South Korea. The declaration contains no mention of verification or irreversibility. Nor does it mention scrapping missiles or even declaring the size of Pyongyang’s arsenal. It sets down no timetable.

Pyongyang made similar pledges in 1993 and 2005, but those accords also included an inspection regime and a verification process, respectively. In other words, Trump has achieved less than Bill Clinton and George W Bush did while giving away far more. Of course, it’s better that Trump and Kim are exchanging pleasantries than threats. Perhaps the Singapore summit can be the beginning of a meaningful process. But it was a bad start. For all his bombast and bluster, Trump appears to have been snookered by a cannier and more strategic opponent.