Donald Trump, Boris Johnson and the route to trade mayhem

Both men think it is the big picture that matters, and that the tiresome details can be sorted out by underlings 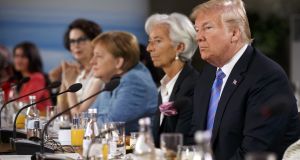 The disastrous G7 summit in Canada was a classic display of Donald Trump’s style of “negotiation” - one which combines self-pity, threats and grandiose and impractical proposals. But just as most of America’s allies recoil in horror at the US president’s trade diplomacy, Mr Trump has found an admirer in Boris Johnson.

At a private dinner last week, Britain’s foreign secretary mused: “Imagine Trump doing Brexit....He’d go in bloody hard.....There’d be all sorts of breakdowns, all sorts of chaos. Everyone would think he’d gone mad. But actually you might get somewhere. It’s a very, very good thought.”

It is a very good thought, but not for the reasons that Mr Johnson thinks. There are close parallels between the Trump style of trade negotiation and that favoured by hardline Brexiters such as the foreign secretary. These similarities explain why both men are likely to damage their own causes, creating “all sorts of chaos” without any compensating gains.

There are three key shared characteristics to the Trump-Johnson style. The first is the belief that big ideas matter much more than detailed knowledge. The second is an over-estimation of your own strength that sets you up for failure. Finally, there is the tendency to turn friends into enemies.

Mr Trump’s supporters are chortling that the president’s sudden advocacy of total free trade at the G7 summit has exposed the other leaders as hypocrites. But their bafflement stems from the fact that, unlike the US president, the other G7 leaders have some understanding of the complexities involved in international trade.

For example, Mr Trump’s suggestion that all subsidies should be abolished is something that the EU has been pursuing internally for decades. In practice, it requires bureaucrats and politicians to agree on what constitutes a subsidy, and then to draw up rules and submit themselves to binding judgments by international institutions. This is just the kind of international governance that Mr Trump despises.

Mr Johnson also thinks it is the big picture that matters, and that the tiresome details can be sorted out by underlings. So he refuses to believe that keeping the Irish border open after Britain leaves the EU is a real problem, rather than a trivial objection thrown up by officials.

The foreign secretary airily dismisses the idea that there will be chaos at ports and borders in the event of a “no deal Brexit”. After all, great men like him do not bother with tedious technicalities such as supply chain management.

As far as Mr Johnson is concerned, the problem with the Brexit negotiations is that the British have not been tough enough. They should be more like Mr Trump and threaten not just to walk away from the table, but to turn it over.

What Mr Johnson ignores is that Britain has already tried this. The negotiations began with brave British cries of “no deal is better than a bad deal”. You do not hear so much of this now because it has become evident that this is clearly not true.

“No deal” would be disastrous for Britain, with crucial areas of commerce, such as pharmaceuticals, finance and aviation, stuck in legal limbo.

The mistake made by Mr Johnson was to assume that because the EU enjoys a trade surplus with the UK, it would never dare disrupt its trading relationship with Britain. But the European market is far more important to Britain, in percentage terms, than the British market is to the EU. The EU has also concluded that there are important principles at stake, and that conceding to Britain might unravel the entire EU internal market. So Brussels has been unyielding and the Brexiters’ bluff has been called.

Mr Trump belongs to the same school of non-thought as Mr Johnson and is making a very similar error - assuming that because the EU enjoys a trade surplus with the US, it will inevitably buckle. At first sight, it seems reasonable to assume that the US is much better placed to push around its trading partners than Britain is. There are some countries such as Canada, which sends 70 per cent of its exports to the US, that are particularly vulnerable. And in some areas, the US does have a massive power advantage. In particular, military might and the role of the dollar in world finance.

But trade is much more of a level playing field. The EU can retaliate against the Trump tariffs quite easily - by targeting American industries, such as farming. Meanwhile, Mr Trump’s tariffs on steel will cause pain inside the US by raising the cost of inputs for industry. The fact that Mr Trump has chosen to take on so many countries simultaneously means that US businesses may struggle to find alternative suppliers.

Both Mr Trump and Mr Johnson lack the empathy to realise that, if you kick old friends in the teeth, they are unlikely to respond in a cheerful and friendly manner. Many of Britain’s EU partners felt angry and betrayed after the referendum in June 2016. And they were particularly furious with Mr Johnson who they saw as the face of Brexit.

As a result, they are still reluctant to make any deals that might look like “rewarding” Mr Johnson. Mr Trump may discover that his bullying tactics on trade backfire in the same way.

5 Irish in Australia: ‘It’s scary here, not able to visit home at the drop of a hat’