Time to step back from constitutional brink over judge Séamus Woulfe 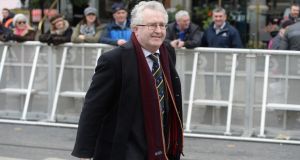 “That Mr Justice Séamus Woulfe erred in attending that dinner in Clifden is hardly in dispute. It is also true that he was ill-advised in handling the matter as he did.” File photograph: Dara Mac Dónaill

To “impeach” or not to impeach . . .that is the question. The Chief Justice – exasperated – has lobbed the ball over the outstretched racket of the Minister for Justice. While not anticipating the play, she read it in the moment and is by now hurtling back towards the baseline, the ball in mid-flight.

The various potential counter-plays are racing through the Minister’s mind, and the minds of those hurtling back alongside her to rescue the point: the Attorney General, the Taoiseach, and leading figures in and around Government. This is centre court, under a hot constitutional sun.

That Mr Justice Séamus Woulfe erred in attending that dinner in Clifden is hardly in dispute. It is also true that he was ill-advised in handling the matter as he did.

His statement of apology, for instance, was seriously devalued by his insistence in the same statement that he did not understand why it was he owed the apology.

The tone of many of his comments in the course of his formal exchange with former chief justice Susan Denham call his temperament, and his judgment as it pertains to the particular matter, into question. (Although it bears emphasis that he made these comments while under strain and, apparently, on the understanding that the meeting was confidential).

And the affair has likely caused damage to the Supreme Court – if not quite the “very serious and irreparable damage” suggested by Chief Justice Frank Clarke in his letter to Mr Justice Woulfe.

So what now? The most obvious play for the Government, and perhaps the easiest, is to press the nuclear button: article 35.4.2 of the Constitution: “A judge of the Supreme Court . . .shall not be removed from office except for stated misbehaviour or incapacity, and then only upon resolutions passed by Dáil Éireann and Seanad Éireann calling for his removal.”

Non-lawyers need not be intimated by the phrasing, because lawyers don’t know what “stated misbehaviour” means either. Its origins can be traced to the Act of Settlement 1701, if not earlier.

In one lens, it is just a matter of raw politics: if majorities of both Houses are satisfied that attending a celebratory dinner in a hotel in the middle of a pandemic (and later failing to apologise adequately) crosses the “stated misbehaviour” threshold for the purposes of article 35.4, then that is that. Mr Justice Woulfe will be “impeached.”

It might be, however, that an individual judge facing an article 35.4 proceeding could seek a judicial review as to whether his conduct had substantively met the threshold of “stated misbehaviour” – and that the judges deciding the case would conclude that they, invested as they are with “full original jurisdiction in and power to determine all matters and questions . . . of law” (article 34.3) – had authority to determine whether particular conduct represented “stated misbehaviour” for the purposes of article 35.4.

In the present circumstances, this latter understanding would make for quite a constitutional scene. Mr Justice Woulfe would likely end up as an applicant before the very Supreme Court of which he is a member, seeking a declaration that his conduct did not count as “stated misbehaviour” for the purposes of the constitutional provision.

And Chief Justice Clarke and his colleagues – having months previously committed to the view in a published letter that they believed Mr Justice Woulfe should resign on foot of the particular conduct – would be faced with handing down the final and authoritative constitutional ruling on the question as to whether or not it did.

It is too late now for the Chief Justice to step back from the brink. The transcript of the Denham-Woulfe exchange has been published, for good or ill

In those circumstances, it could turn out that a majority of the Supreme Court was of the view that the conduct did not quite cross the threshold. The particular constitutional question, after all, is a different from the question as to whether Mr Justice Woulfe should himself resign.

That is, the judges on the Supreme Court, in any such case, may feel that for a judge’s bad conduct to cross the article 35.4 threshold that bad conduct would have to have a sufficiently close bearing on the judicial role itself.

The indiscretion would have to pertain to the administration of justice, rather than merely to the judge’s choice of summer holiday fun.

It is too late now for the Chief Justice to step back from the brink. The transcript of the Denham-Woulfe exchange has been published, for good or ill, as have the Clarke-Woulfe letters. And Mr Justice Woulfe is not for turning.

Imagine that 10 years from now we have a character like Donald Trump in the taoiseach’s office, and that they wish to use their majority in the Oireachtas to impeach a judge. The liberal opposition will cry foul: this is an abuse of article 35.4. That taoiseach would no doubt be happy to have a Woulfe impeachment precedent on hand.

To paraphrase comments on presidential impeachment by James Bryce, a 19th century observer of America , article 35.4 is “so heavy a piece of constitutional artillery” as to be “unfit for ordinary use”.

The constitutional sky will not fall in if Mr Justice Woulfe – perhaps having taking a yellow card of some kind – sits on the Supreme Court and decides cases. Just get the ball back across the net and move on.