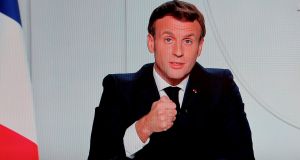 French president Emmanuel Macron on Wednesday as he delivers an evening televised address to the nation, to announce new measures aimed curbing the spread of Covid-19. Photograph: Ludovic Marin/ AFP via Getty Images

Europe is firmly in the grip of the second wave. Its rate of new infections has tripled in the past month, topping 200,000 a day. And so the Level 5 lockdown imposed in the Republic last week was very much a harbinger of the widespread new anti-coronavirus measures across the EU.

Mostly these are in the form of time-limited “firebreak” measures, giving some certainty about when a degree of normality will be restored. Germany’s federal and state governments agreed on Wednesday to shut parts of the economy and toughen restrictions on social contact from Monday and until the end of November. “Within weeks we will reach the limits of our health system,” Chancellor Angela Merkel warned. France’s president Emmanuel Macron announced a similar one-month lockdown, with just schools and essential businesses staying open. “Like all our neighbours, we are submerged by the acceleration of the virus,” he said, warning that the second wave would “probably be harder and more murderous than the first”.

Prof Peter Piot of the London School of Hygiene and Tropical Medicine, an adviser to the European Commission, warns that the numbers of new infections in the EU are “really staggering” and that harsher lockdowns are inevitable. “The resurgence we are seeing now after the initial successes over the summer shows how fragile these gains are,” he says. “We kind of relaxed too much the measures that are basically about behaviour – [and] we are paying a high price.”

Stringent lockdowns early in the year helped bring the initial Covid-19 surge under control. But the virus has again spread rapidly back through Europe in recent weeks in a resurgence that has forced national leaders to introduce painful new restrictions.

Spain went back into a state of emergency last week . On Sunday Italy moved to shut restaurants by 6pm. In Belgium, currently the continent’s highest infection rate, restaurant closures were followed at the weekend by museums and gyms.

The Czech Republic, which escaped the worst in the spring, has more than quadrupled its caseload in October, filling its hospitals. It has declaried a second national lockdown with a new nighttime curfew. It has asked EU and Nato partners to send medical staff to help.

Meanwhile, a new report published on Thursday has found that a variant of the coronavirus originating in Spain has spread throughout Europe and is responsible for a majority of new cases and up to 60 per cent of those identified in Ireland. The spread of variant “20A.EU1” of Sars-Cov-2, the virus that causes Covid-19, is being attributed to “risky behaviour” by holidaymakers who then brought the virus back home. It raises important issues about the effectiveness or non-implementation of airport testing.