Kathy Sheridan: We knew who Trump was from the start

Can we ever go back or have the four years of his presidency taken us in too deep? 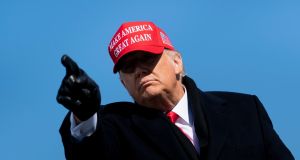 The question for his enablers will always come back to this. Were the tax cuts, the regulation-slashing, the right-wing “originalist” judges worth the plunge into the Trump sewer of lawlessness, nepotism and corruption? Photograph: Brendan Smialowski/Getty Images

The most important thing to remember? We knew exactly who Donald Trump was. Always. Four years ago, he repeated that Hillary Clinton could be murdered by his second amendment pals if she won. He said he would not accept the result unless he won.

He never changed. It was those round him who dug in, even if a once-in-a -hundred years pandemic led some to finally ask questions.

The question for his enablers will always come back to this. Were the tax cuts, the regulation-slashing, the right-wing “originalist” judges worth the plunge into the Trump sewer of lawlessness, nepotism and corruption?

On the streets of our democracy, his legacy is there in the calls to a perverted “patriotism” and “freedom”, the anti-vaxx, anti-immigrant insanity, the Trump-endorsed QAnon merchants, the witless “fake news”and constitutionally ignorant #notourTaoiseach posts .

Can we ever go back? Have the four years of the American experiment with “authenticity” taken us in too deep? Or on the positive side, have they served up fair warning and better tools?

The following is just a starter list of where we stand as the election results unfold today.

The Lies: In August, Trump was averaging 56 false or misleading claims a day, according to the Washington Post, and probably more than 25,000 for his presidency. Most were childishly transparent but were amplified by his Fox News propaganda channel and . . .

Fake News: a term weaponised by Trump in January 2017 when, cornered by a question, he pointed at a CNN journalist and snarled, “you are fake news”. Every contemptuous dismissal since then is rooted in that reply. Last week, he tweeted “fake news” a dozen times. But – here’s the good news – at least he can take credit for one thriving new industry, which is . . .

Fact Checking: The world has seen a 200 per cent increase in the number of fact-checking organisations since his 2016 election, according to the Duke Reporters’ Lab. This is excellent. Then again who cares if there is no . . .

Shame: Trump has taught us that shame performs a vital democratic function – and how dangerous is the man who feels none of it, to quote Jonathan Freedland. Such a man is capable of anything, including . . .

Both Sides-ism: the moral equivalence assigned by Trump between white supremacist/neo-Nazi marchers and anti-racist protesters in . . .

Charlottesville: “very fine people on both sides”; blame assigned to “both sides”. A self-described neo-Nazi who rammed his car into protesters in the town killed 32 year old Heather Heyer. Both Sides-ism is a cousin once removed from . . .

False Equivalence: As long as Hillary Clinton’s emails continue to generate Trumpish lock-her-up chants the media will stand accused of the catastrophic consequences of false equivalence.

By hammering at the story relentlessly in 2016, they implicitly endorsed everything Trumpish, including his signature . . .

Personal Insults: When a bully boy can win the White House by throwing out lazy, demeaning insults, what’s not to like for his mini-me’s? The Turkish president has twice described President Emmanuel Macron as a “mental case”. It’s now a universal infection and the cure lies with us – as does our share of responsibility for . . .

Social media dominance: In four years Trump’s Twitter followers soared from 11 million to 87 million. Every single follower has boosted that global platform for a vengeful, temperamental man to threaten war abroad and shooting at home. Twitter finally took action by “hiding”and fact-checking some tweets. Facebook even deleted a recent Covid-19 post. It’s just a start. But it may help to combat . . .

Populism: For Trump predictably, the real, grinding policy stuff like the federal debt, bringing back factory jobs, draining the swamp, accusing China of “raping” the US on trade soon morphed into self-serving diatribes about “the China virus” and Hunter Biden. Do his voters care? “This is the moment when we’ll learn whether what was at stake all along was identity and culture,” says author Anne Applebaum, which brings us to...

Peter Thiel: Remember when the PayPal co-founder and big Trump donor opined four years ago that the media went astray because they insisted on taking Trump literally but not seriously, whereas his many voters took him seriously but not literally?

Tens of millions of white – and some prominent black – evangelicals have provided cash, votes and serious political underpinning for Trump

So when they heard things like the Muslim comment or the wall comment, he said, they interpreted that as “we’re going to have a saner, more sensible immigration policy”. Let’s remember that lesson in moral slipperiness and relate it to the children in the cages. Which brings us to . . .

Irish-American enablers: Trump’s passing parade of proud, pro-life Irish-American enablers was bewildering, then hotly humiliating. On the upside, America’s third most powerful politician this term was a well-informed Good Friday agreement supporter, a woman with no Irish blood at all. Here’s to the new term, Nancy Pelosi.

So how did the Irish-American enablers fare against . . . The evangelicals: Tens of millions of white – and some prominent black – evangelicals have provided cash, votes and serious political underpinning for Trump.

Many Catholics joined them and got their judges but it was an evangelical pastor who got the nod as Trump’s formal adviser on faith issues. That was Paula White, who once said that God believes Christians should be rewarded with material wealth and called for “all satanic pregnancies to miscarry right now”.

Jerushah Duford, granddaughter of Billy Graham and evangelical royalty, was the brave one here.

She told USA Today that she no longer felt she belonged to a community where so many church leaders were either silent on Trump’s most egregious actions or endorsed him. She said this when as one dissenter put it, “It’s like cricket out there. If you poked your head above the parapet, you got your head blown off.”

Let’s hope at some stage there can be healing. But some Texas-sized doses of humble pie wouldn’t go amiss.