American democracy was on the ballot – and it has lost

Americans react to the election results as they come in across the country. Video: Reuters 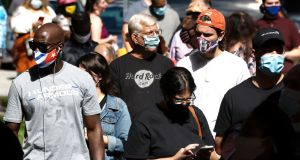 Early voters queue during the 2020 US presidential election at Temple Terrace Public Library in Tampa, Florida: the historic turnout was one positive of the election. Photograph: Peter Foley

In the 2020 US election, democracy was on the ballot. It was clear on Wednesday as the votes came in that American democracy has clearly lost. In a moment both astonishing and entirely predictable, president Donald Trump declared victory long before all the ballots had been counted.

A big win for Joe Biden would have offered resolution. But, as in 2016, the Democratic candidate underperformed their polls. Counting continues in key swing states; one hopes that it provides clarity. But the situation could get very ugly, especially if the vote remains very close and a barrage of legal challenges ensues. Trump has already undermined the legitimacy of the results and has actively cultivated a following of racist far-right militias who stand by to commit violence.

How on Earth did it get to this point? The American democratic structure is inherently flawed. If the election were decided by a simple majority vote, there would be no drama about who won. But according to the US constitution, drafted by a small group of elite men in 1787 and partly designed to preserve slavery, the president is chosen through the archaic electoral college.

If Trump turns out to be re-elected, it will be the third time in the last six elections that the president received fewer votes than their rival. The situation is similar in the senate, where Republicans appear likely to maintain control despite again losing the popular senatorial vote. But the constitution grants two senators to each state. Thus, residents of tiny, rural, largely white and conservative states such as Wyoming get the same representation as urban, multiethnic, and liberal states such as California which has 40 times Wyoming’s population. This is not how a 21st-century democracy should function.

It is tempting to ascribe the current crisis solely to Trump’s autocratic tendencies. But actually the Republican Party has been undermining American democracy for many years. Despite having a committed conservative base, Republicans know better than anyone that they would lose out if governments were elected by majority vote. As a result, especially since Barack Obama’s election in 2008, Republicans have gamed the system in their favour.

If there was any positive sign for American democracy in this election, it was the historic turnout

They shamelessly gerrymandered congressional districts after winning a majority of state legislatures in 2010. They have used a variety of techniques to suppress the vote of likely Democrats, especially after a majority Republican-appointed supreme court declared the Voting Rights Act unconstitutional in 2013. That Act, originally passed in 1965, was designed to eliminate the racist disenfranchisement of African-Americans. Now the suppression of black voting is a staple Republican electoral strategy.

The Republican-controlled senate has flagrantly grabbed power through the courts. It effectively stole two supreme court seats. It first refused to hold hearings on Obama’s nominee in early 2016 on the pretext that the next president should make the appointment. Then this year it brazenly rushed through Trump’s appointment of Amy Coney Barrett just days before the election. It is this supreme court that might be called on to make a decisive ruling about who won the presidency.

Democrats also bear responsibility for undermining American democracy. They were far too slow to combat the threat the Republican Party posed. As Republican strategist Steve Bannon marvelled, “Our side, we go for the head wound. Your side, you have pillow fights.”

When in power, Democrats missed opportunities to expand American democracy in ways that would benefit them electorally. For example, after 2008 they could have passed strong national voting rights legislation and granted statehood to Washington, DC. Unfortunately, such democratic reforms will now only be possible if Democrats again control the presidency and both houses of Congress, which at the moment appears unlikely after this election. Should that time come, however, hopefully Democrats will have learned their lesson and will make democratic reform their top priority. But for now they must win on an uneven pitch.

Regardless of who wins the presidency, Democrats must ask tough questions about Biden’s underwhelming performance. Democrats again cast the election as a referendum on Trump and failed to offer Americans any positive programme beyond the status quo. But the status quo has not been working for most Americans. For decades, Democrats have pursued economic policies that have exacerbated inequalities and undermined their support among ordinary Americans.

The current Democratic strategy of appealing to affluent moderate Republicans in the suburbs has produced disappointing results. Could Bernie Sanders, who sought instead to appeal to working Americans with a platform of healthcare and economic rights for all, have done better than Biden?

If there was any positive sign for American democracy in this election, it was the historic turnout. Americans are engaged in politics in a way they have not been for several decades. The images of African-Americans waiting 10 hours in line to vote in Georgia are appalling, but they are also inspiring. Constrained by an archaic political system and in a moment of historic crisis, the American democratic spirit still lives.