How the Irish helped Joe Biden rebuild the blue wall 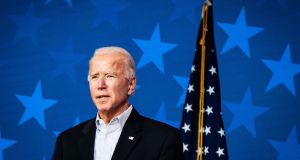 If ever there was a politician fit for the purpose of helping win back the three key states of Pennsylvania, Wisconsin and Michigan by switching enough of the blue collar Catholic vote it was Joe Biden, himself Irish Catholic from a working class union house background in hardscrabble Scranton. Photograph: Erin Schaff/the New York Times

On April 19th, 2019, former vice president Joe Biden made his first campaign speech before the International Firefighters Union in his run for the Democratic presidential nomination in Pittsburgh, Pennsylvania. He quickly made clear how he would successfully traverse the road to the White House.

“If I’m going to be able to beat Donald Trump in 2020, it’s going to happen here,” he said, making clear he was honed in on a “blue wall” strategy.

He committed himself to rebuilding the electoral majority Hillary Clinton shockingly lost in 2016 mainly because she was defeated in Pennsylvania, Wisconsin and Michigan, previously the linchpin of Democratic presidential victories.

White Catholics across the US including Irish Catholics had turned against Hillary – only 37 per cent of them voted for her. She did no better in the blue wall states.

Overall, about 30 per cent of the electorate in the blue wall states were Catholic and 35 per cent did not have college degrees. They were hostile to Hillary on issues ranging from abortion to gun control to downright sexism.

But Biden was not Hillary Clinton. Besides, he was a Pennsylvania native.

If ever there was a politician fit for the purpose of helping win back the three key states by switching enough of the blue collar Catholic vote it was Biden, himself Irish Catholic from a working class union house background in hardscrabble Scranton.

He went where Hillary didn’t. Biden is the only presidential candidate in the modern era who ended up more popular the day of the election than he was starting out.

'White Catholics are important in places like Pennsylvania, Michigan and Wisconsin,' Burge said. 'If you can swing them your way, that’s the difference in close races'

That was because, despite frenzied efforts, Donald Trump could never pierce his armour the way he had demeaned Hillary with his disgraceful “Lock her up” chant.

Biden’s aim was to be both authentic and clear about who he was. He quickly made obvious in his first debate with Trump that he was going to compare the president’s opulent background with his own hard-up upbringing.

“They [Trump] look down their nose on people like Irish Catholics, like me, who grow up in Scranton,” Biden said during that debate.

It was a message Biden would drive home continuously. Joe Biden, America’s Everyman.

When the blue wall strategy hit turbulence some on his campaign urged different routes to electoral victory, such as via Florida where a win would completely block Trump, or a southern strategy involving Texas or Georgia. But Biden was not for moving.

During the last few weeks he focused almost maniacally on Pennsylvania, divining rightly that it was the least safe building block of his blue wall strategy. He would live or die by the hand of the denizens of his beloved and aptly named Keystone State.

One of Biden’s clear objectives became winning more of that rural and small town Catholic vote while running up the winning margins in the big cities. He visited the most hopeless counties –Trump redder than red –from his perspective, intent on purloining the handful of votes that could make all the difference

It turned out to be an inspired strategy.

Ryan Burge, a political science professor at Eastern Illinois University, told NPR Biden did the right thing. “White Catholics are important in places like Pennsylvania, Michigan and Wisconsin,” Burge said. “If you can swing them your way, that’s the difference in close races.”

Deputy national political director John McCarthy took on the task of motivating the Irish American community. It was not hard to do so on issues ranging from Northern Ireland to Brexit. Biden had made clear his deep affection for the Irish.

The Irish Americans for Biden group was founded (full disclosure, I am a board member) and received tremendous co-operation from the campaign. An amazing 1,200 Irish Americans attended the first Zoom rally, the largest ethnic event the campaign had held. There were six other events organised as well as a specific Pittsburgh event.

In a new move, the 100 most common Irish surnames were cross-referenced to the Pennsylvania electoral list. Irish Americans were identified and called and emailed by the Irish Americans for Biden group.

When the race was over and Biden squeaked through in all the blue wall states, NPR noted, “One slight change this year was a small decline in support for Trump among white Catholics, compared to 2016, according to National Election Pool and AP/Votecast.”

The decline in support was exactly what president-elect Biden had envisaged when he began his hegira through the heartlands of Pennsylvania. In a razor-thin election every vote counted, and some of the Irish Catholic vote had come home – just in the nick of time. It was president-elect Biden a few days after the election and the blue wall had held.