The origins of an event known as 'Plough Monday' remain obscure 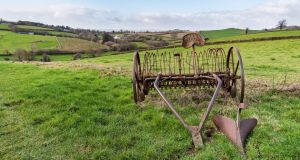 An event known as “Plough Monday”, the first Monday after the traditional 12 days of Christmas, falls this year on the 13th. Photograph: Rich Higgins/iStock

Unlike many people, I don’t even attempt “Dry January”. I prefer a more sustainable model of self-restraint, based on the 10-day weather forecast, which predicts it will be predominantly dry for the rest of the month but with occasional showers and the threat of more persistent rain spreading later from the direction of February.

To readers attempting anything more ambitious, I wish you well, although this weekend – January 12th in particular – is said to be the time when new year resolutions are most likely to fail.

On a more optimistic note, meanwhile, an event known as “Plough Monday”, the first Monday after the traditional 12 days of Christmas, falls this year on the 13th.

Origins of that custom are obscure. There cannot have been much actual ploughing involved. In any case, as usual, it was an excuse for drinking. Farmers wheeled a pretend-plough from door to door while collecting money.

If you live in the Ulster counties or Leitrim, you have to wait until February 1st before your nostrils are treated to that great aromatic harbinger of spring

Officially, they were raising funds for candles to be lit in prayer for a good year. Ideally, they would raise enough for the farmers to get lit too.

And it’s doubly appropriate because, according to another tradition, the first Monday in January is also the year’s busiest for divorce lawyers.

Sure enough, the song’s narrator is recovering from a break-up: “Let me bore you with this story how my lover let me down/While I borrow seeds of sadness from the ground.” But again, the ploughing lyric not truly seasonal. Sensibly, from an agricultural point of view, the song is set in autumn.

For a more realistic, if less romantic, January metaphor, I note that this coming Monday is the start of slurry-spreading season in Ireland. It’s spreading in more ways than one, in fact, because the country is split into three zones, with staggered dates.

In Zone A (southern Leinster and east Munster), it begins on the 13th. In Zone B (North Leinster and the West) it’s the 16th. But if you live in the Ulster counties or Leitrim, you have to wait until February 1st before your nostrils are treated to that great aromatic harbinger of spring. Still, at least it’s something to look forward to.

Getting back to an already-failed new year project, discussed here yesterday, I have received conflicting advice from readers about my abandonment of a plan to read all 12 volumes in Anthony Powell’s epic, A Dance to the Music of Time. Opinions range from a belief that the books are worth persevering with to the view expressed by one Mark Power, who writes: “When I consider the scope, breadth and volume of Powell’s oeuvre, my first instinct is to weep for the trees involved.”

On a separate note, another correspondent draws my attention to a detail from a recent biography of Powell: that, shortly before marrying the Anglo-Irish aristocrat Violet Packenham in 1934, he had to say goodbye to two other lovers, including a friend of his future wife with whom he “shared a farewell quickie in the back of a Dublin shop”.

The shop is not specified, alas, so the chances of it getting a literary plaque now are slim.  Nor is the woman identified, although it’s known that Powell’s romantic interests of the period included Dublin-born playwright Mary Manning.

And as well as being herself a writer, that same Mary Manning was indirectly responsible for one of my favourite footnotes of 20th-century literature. It was in a letter to her in 1937 that Samuel Beckett mentioned how his mother was encouraging him to contribute to this newspaper, because – as he summarised – “I write at least as well as the Irishman(sic) Diarist”.

Anyway, Powell’s marriage was a success – it lasted 66 years. It’s also surmised that Packenham was a big influence on his work. She was a writer too, of among other things “one of the best literary biographies” of the 20th century.

That was as recently as 1988, in fact, and may be a lesson in the fleeting nature of fame. The subject was a woman born under the magnificent moniker of Edmée Elizabeth Monica de la Pasture, later part-anglicised to EM Delafield. As the latter, she was extraordinarily prolific, writing more than 40 books. But I had somehow never heard of her until now.

Sic transit gloria mundi (which sounds like the start of another week in January). Perhaps she’s due a reissue by some resourceful publisher. You never know. In the Delafields of Opportunity, it may be ploughing time again.