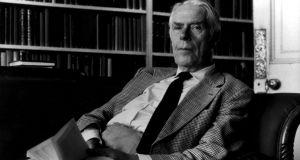 I wouldn’t go as far as to call it a New Year’s resolution but, as recently as last weekend, one of my plans for 2020 was to read the entire novel sequence A Dance to the Music of Time by Anthony Powell.

At least I hoped to make a good start on it. There are 12 books in the series, one for every month, so it would have been an epic undertaking. Yet the eulogies of Powell fans over the years had convinced me that once started, I wouldn’t want to stop.

Speaking of sets of 12, there is something apostle-like about Powell’s followers. The last example was actress Joanna Lumley writing in the Spectator over Christmas about a temporary crisis of faith she once had, now resolved.

There was a time when, for her, repeat-reading the books was like “repainting the Forth Bridge”. As soon as she finished the series each time, she would start again. Then she began hearing from other addicts, now in recovery, who warned that the novels’ charms palled eventually.

To forestall such crushing disillusionment, she put the books aside for a year: “. . . then recently I opened At Lady Molly’s [volume four] and the thrilling drug rush of that alternative world, whose characters are now as familiar as my own family, speared back into my brain. I was wrong. They were wrong. Powell is matchless.”

Other admirers have compared the author with Joyce and Proust (whose masterpiece the sequence title echoes). So for these and other reasons, it was with high hopes that I bought the first volume over the new year and started reading.

The hopes were still high on page eight where, recalling his public-school education – as private-school education is mysteriously known in England – the narrator describes the characteristic compound of smells in a 1920s hall of residence: “carbolic soap, airing blankets, and cold Irish stew”.

And it was around then that I started to think the book itself was a cold stew, albeit English, for which I was struggling to acquire a taste.

It’s set in an era when men (and Eton schoolboys like Powell) wore starched collars.  But the characters seemed starched too, even when doing interesting things like getting expelled.

As for the stiffness of the writing, there seemed no excuse for the likes of this, in which the Powell-like narrator has a vocational epiphany: “This ideal conception – that one should have an aim in life – had, indeed, only too often occurred to me as an unsolved problem; but I was still far from deciding what form my endeavours should ultimately take.  Being at that moment unprepared for an a priori discussion as to what the future should hold, I made several lame remarks to the effect that I wanted one day ‘to write’: an assertion that had not even the merit of being true, as it was an idea that had scarcely crossed my mind until that moment.”

You might hope that this pomposity would be cured by his first doomed love affair.  But no.

Here he is, on page 166, pondering his second doomed love affair: “I was, however, struck by the reflection that undoubted inconvenience was threatened if this apparently recurrent malady of the heart was to repeat itself throughout life, with the almost dizzy reiteration that had now begun to seem unavoidable.”

Soon after that, I found myself Googling to find out if anyone else out there had found this stuff less than Joycean, or if perhaps, as with Finnegans Wake, it was a rookie mistake to start the series at the start. Maybe, like Joanna Lumley, I should have headed for Lady Molly’s first and worked around from there.

But as I know now, Powell has long divided readers. A vain man, he himself separated them into two categories, opposite ends of a well-known metaphor: “shits” and “fans”.  The former included Auberon Waugh, whose criticism of him in the Sunday Telegraph in 1990 led to Powell’s resignation as the Daily Telegraph’s long-time book critic and nearly got the literary editor sacked.

Even some friends had doubts. After Powell’s death, VS Naipaul read his work for a career retrospective and concluded that their friendship of decades had benefitted from the fact that he hadn’t read the books while the writer was alive.

Reluctant as I am to give up after the first volume, I don’t seem cut out for apostleship either. Certainly, any urgency to read the second volume has waned. Rather than dance to the music of time, I feel like a first-round eliminee from a game of musical chairs, in which there are 11 seats remaining and they’re all already occupied.