Lyrics of the English version, by John Sullivan Dwight, are somewhat less strident than the original 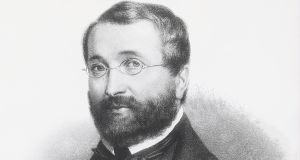 It’s a notorious fact that O Holy Night, the most reverent of Christmas hymns, was created by a man of little piety, who ultimately preferred socialism to Christianity.

Or at least that was true of Placide Cappeau, the poet who wrote the original text as Minuit, Chrétiens (“Midnight, Christians”). But it was underlined by Adolphe Adam, a composer who then added the music and who, likening the combination to the anthem of the French revolution, called the finished work La Marseillaise Religieuse.

Not that it was finished, yet. It had still to be translated into English, the form in which it is most widely known today. And the man who did that was certainly devout, if in at least one respect unchristian, a subject to which we’ll return.

As for Cappeau, his most famous song may also have had origins in a violent accident during his childhood.

Growing up the son of a cooper in Roquemaure – a village just across the river Rhone from Châteauneuf-du- Pape, he might have followed his father into the wine business. To some extent he did.

But when Cappeau was only eight, a friend playing with a gun shot him in the right hand, which required amputation. The loss of limb earned him an education he might not otherwise have enjoyed, leading to careers in law and literature, with a preference for the latter.

Written in 1847, the great carol was a commission of sorts. The parish priest of Roquemaure, celebrating the renovation of the church organ, asked Cappeau to compose a Christmas poem. With Adam’s music, the hymn was first sung at that year’s midnight Mass.

Speaking of 1847, the other thing Roquemaure is known for was the introduction to France (a decade later) of phylloxera, a pest that did for vines what phytophtera infestans had done for the potato.

Phylloxera was an insect, brought inadvertently from America to a local vineyard, where vines began to die mysteriously in the 1860s. From there, the “Great French Wine Blight” spread all across the country in the decades following, wiping out most of the crops.

But getting back to Minuit, Chrétiens, or Cantique de Noël as it’s also known, the great hymn’s secular undertones for a time earned the disapproval of the French church.

Its rehabilitation may or may not have included a cameo in the Franco-Prussian war, when in a legend that foreshadows the Christmas truce of 1914, a French soldier somewhere is said to have broken cover to sing it, inspiring the Germans to reciprocate.

The carol’s inclusion in the first transatlantic radio broadcast is better documented, at least by the man who claims to have done it.

Canadian inventor Reginald Fessenden recalled that during a transmission on Christmas Eve 1906, he played on violin “a composition by Gounod called O Holy Night, and ended up with the words adore and be still, which I sang one verse of [. . .] though the singing of course was not very good.”

The problem with that, however bad the singing, is that Gounod didn’t write O Holy Night, which does not include the words quoted (although a different Gounod piece does). Also, Fessenden only claimed the broadcast near the end of his life, in 1932, and while he had certainly been a radio pioneer, there is doubt whether the event happened at all.

Oh well, O Holy Night was well on its way to becoming an established classic by then. As for the man who wrote the English version, that was John Sullivan Dwight, a Unitarian minister from Boston, whose lyrics are somewhat less strident than the original.

On the one hand, his dramatic “Fall on your knees” line is a direct translation of Cappeau’s “Peuple a genoux”.

But whereas the French song has “Peuple, debout!” (“People, stand up!) in the last verse, the English opts for “Christ is the Lord”. And in general, it has less of the Marseillaise about it.

His religious vocation aside, however, Sullivan Dwight was also high priest of classical music, hugely influential as a critic. Furthermore, it seems, he was a snob. A frequent victim of his opinions was an American pianist and composer Louis Gottschalk, whose faults included being enormously popular.

At a concert once, in revenge, Gottschalk set a trap, juxtaposing a lesser known Beethoven work with one of his own, while reversing attributions in the programme. The critic fell for it, lauding the supposed Beethoven piece and panning the other.

It was time then for the great critic to fall on his knees.

Gottschalk sent him a note apologising for the “printer’s error” but expressing gratitude for the inadvertent praise.