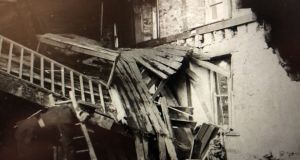 Surveying the damage after a raid on the RIC barracks in Ballytrain, Co Monaghan, on February 15th, 1920. Eoin O’Duffy praised the RIC men’s courage. Before withdrawing, the raiders left bandages for the injured, having failed to find a doctor.

One of the first seizures of an RIC barracks during the War of Independence happened not in the “Republic of Munster”, scene of so much of the fighting, but a place called Bellatrain in Co Monaghan, a few miles from where I grew up.

The imminent centenary aside, it is interesting to read about that event now, after the Government’s commemoration debacle. For one thing, it involved several celebrity IRA men of the period, including Eoin O’Duffy, Ernie O’Malley, and Dan Hogan.

But taken in isolation, it might have been a role model for attempts to commemorate the other side of the conflict, because notwithstanding a three-hour gunfight and the destruction of the barracks with a landmine, it appears to have been a very gentlemanly affair.

Bellatrain (or Ballatrain) is what locals call it, by the way. The usual English spelling is Ballytrain. And latter-day confusion is increased by the fact that the barracks was not located there, but rather in the neighbouring hamlet of Shantonagh.

They’re two crossroads, basically, a few hundred metres apart. If you amalgamated them now, you would still barely have a village. But one of the few places I have seen Bellatrain mentioned by that spelling was in this newspaper’s “Where’s That?” column once, in 1988, which suggested it was a more substantial place in former times.

Then the Famine intervened. Some parts of south Monaghan were much worse affected than others, including Ballynagearn (where my mother went to school), which lost three-quarters of its population. But as for Bellatrain, as our columnist wrote, it “simply disappeared after the disaster”.

Seventy years later, events of February 15th, 1920, put it back on the map. A large force of IRA men under O’Duffy first barricaded approach roads, then took over a “lock-up store” adjoining the barracks and a shop across the road.

A gun and grenade battle started at 2am and ended three hours later when Hogan’s landmine blew in the gable wall. Expecting the explosion, the six RIC men had removed themselves to the opposite side. Four were injured, but not seriously, and while the raiders helped themselves to weapons, the defenders were not further harmed.

On the contrary, police reports of the aftermath (quoted in The Irish Times) suggest the decorum of a cricket match. Told the RIC men were all alive, the IRA leader was said to have expressed relief: “I am glad that no life has been lost. None of our men were shot either. We did not come to do injury, but only for arms.”

Nor was he interested in the station’s cash: “We don’t want your money; it is too much money we have”. In his own statement on the attack, meanwhile, as if writing them a reference for their next posting, O’Duffy praised the RIC men’s courage. And before withdrawing, the raiders left bandages for the injured, having failed to find a doctor.

Maybe they didn’t look hard enough for the doctor, because in O’Malley, they had a former medical student. Then again, perhaps he was distracted by other things. In his classic memoir, On Another Man’s Wound (1936), for example, he devotes a mere paragraph to the taking of the barracks, the first “north of the Boyne”.

Typically, however, he precedes this with a description of equal length on his general travels in the area as IRA organiser:

“I wandered for months through the small lakes and little hills of Monaghan. I saw sieges of heron in the reeds and waited for bat-tailed otters near Carrickmacross where they are said to pass through when going from one lake to another. I was able to disprove the lines: ‘From Carrickmacross to Crossmaglen/You meet more rogues than honest men’.”

That’s the sort of thing that made O’Malley the conflict’s best writer. Brilliant a soldier as Tom Barry was, by contrast, his memoir has little such colour.

Unfortunately, O’Malley did not elucidate on how he disproved the old slur about the alleged rogueishness of my native region – we could have done with the PR.

Nor does he elaborate about the other wildlife, although despite being from Carrickmacross, I myself have never seen a bat-tailed otter, whatever that is.

Wildlife books seem to share my ignorance. So – almost – does Google. You may have heard of the game Googlewhack, the challenge of which is to come up with two words that, entered in the search engine, produce precisely one hit. It’s not easy to do, but when I entered the term “bat-tailed otters” just now, the only result anywhere in the world is O’Malley’s book.

If any readers have more information about this mysterious species, my incident room is now open.