The path to remain just got easier 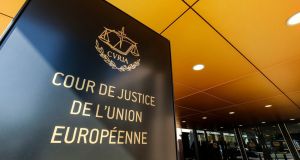 A general view of the entrance of the Court of Justice of European Union in Luxembourg. Photograph: Julien Warnand/EPA

We can cancel Brexit. That’s what the advocate general to the court of justice of the EU, Europe’s highest court, advised this morning.

The advocate general, Manuel Campos Sánchez-Bordona, said that the UK can cancel its article 50 notice unilaterally. This means that if our own parliament decides that our interests are best served by remaining, the EU cannot stand in our way.

His decision is not certain to be followed by the full court – which has yet to announce when it will give its judgment – but courts follow their advocate general in the overwhelming majority of cases. And if it does here, we are much more likely to stay in the EU.

Article 50 is silent about whether a member state that had decided to leave can change its mind. And the issue had been shrouded in doubt since Gina Miller’s barrister told the supreme court it could not be done. But this morning the advocate general disagreed.

We also learned that we should be able to continue to benefit from the perks we presently enjoy – such as the £100 million a week rebate and the control over our borders that comes from us opting out of the Schengen agreement on free movement. Politicians know that giving these up would make it much harder to justify staying in the EU – and that’s why only last week Michael Gove stated categorically that “we would be forced to accept far tougher terms than we have now. Keeping the rebate? Forget about it.” But we know now – as he should have known then – that this is highly unlikely to be true.

The opinion also clears the legislative path to remaining. One option is for MPs to just cancel the article 50 notice without a further referendum. That is a course the advocate general has recognised is open to parliament. And the 2016 referendum parliament enacted was only advisory, after all.

Faced with that choice today MPs would undoubtedly reject it. But the European Research Group’s failure to gather the 48 letters to start a Conservative leadership context proves just how little support there is in parliament for a no-deal Brexit. If MPs find themselves approaching the 29 March 2019 deadline without a deal, the appeal of a simple backstop to avoid the no-deal precipice may become overwhelming. And they may reflect on this paradox: if the vote in June 2016 was legitimate, how can we contemplate another referendum? And if it was illegitimate, why do we need another one?

The difficulty with the alternative route – a second referendum – is one of timing. Even after this morning’s opinion we still need the permission of the other EU member states to extend time to hold a second referendum. But, if the political will exists, a referendum could be held in short order. The referendum in Greece on whether to accept the bailout conditions took only place a week after its parliament voted for one. And the opinion gives the EU every reason to extend time. A choice to remain made by the people may well be considered a stronger mandate than a decision to remain made by MPs alone.

It would be an act of great hubris to pretend any of this was simple, or settled, or done. There are formidable obstacles in the way of MPs seeking to force through a decision against the wishes of the government. We learn that, if nothing else, from the attempts to force the government to disclose its legal advice on the Irish backstop. But there is no denying the path to remain just got easier.