Popular revolt has been brewing for 50 years 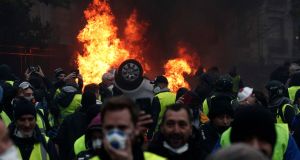 Cars burn as Gilets Jaunes protesters wearing yellow vests clash with riot police near the Arc de Triomphe in Paris. There are between four and eight million people from working families fighting for recognition from a French state they feel has abandoned them for decades. Photograph:Yoan Valat/EPA

France’s “Gilets Jaunes” (named after motorists’ sleeveless high-visibility safety jackets) shook the government last Saturday with about 75,000 people staging demonstrations all over the country. There was rioting in Paris, Toulouse, Tarbes, Pau, Bordeaux, Narbonne, Nantes, Charleville Meziers, and perhaps most symbolically the torching of the prefecture in Puy-en-Velay (Haute-Loire).

This popular revolt has been brewing for 40 or even 50 years and has now gained a traction that poses a growing challenge to the government of Emmanuel Macron.

The 4,600 police and gendarmes deployed in the capital were too few and too thinly spread to control an urban guerrilla situation as small groups struck, burned cars, looted businesses and then vanished as police arrived, only to reappear somewhere else 15 or 30 minutes later. Some 65,000 police and gendarmes were deployed across France, which prevented a concentration in Paris.

The trigger for the demonstrations was the rise of fuel prices in mid-November. World oil prices made up the lion’s share, but a part came from tax rises with a carbon-tax element.

The movement is completely novel in that it was largely created via Facebook. Europe’s first leaderless movement built online. Some 300,000 demonstrators spilled out on to local roundabouts, motorway toll booths, and shopping centre car parks all over France in mid-November.

The government was forcing people to choose between the "End of the World" as in climate change, and the “End of the Month” as in the next pay cheque

The movement has no links to any existing parties, trade unions, or other organisations, no structure and no leadership. It is simultaneously highly political in its demands for governmental action, and almost totally disaffected from the state and society.

Who then are the Gilets Jaunes? There are between four and eight million people from working families fighting for recognition from a state they feel has abandoned them for decades. Polls show 50 per cent of French people supporting their actions, with almost another 38 per cent saying the understand the reasons behind those actions. Outbreaks of violence have not, up until now, made much of a dent in that support.

Most are in unskilled jobs with few career options earning the legal minimum wage of just under €1,200 net. For a couple where the wife works part-time, take-home pay can approach €2,000, but for single parent families it is stuck under €1,200. Forty years of collateral damage have fired up these forgotten families.

Social housing output in France has been slow to adapt to changing employment patterns. Jobs are no longer concentrated in major cities and towns, but in business parks on urban peripheries.

Gilets Jaunes see themselves as becoming steadily poorer, with less hope than their parents’ generation

France’s concentration on the high-speed TGV rail since the late 1970s came at the expense of the rest of the rail network with local lines being the main victim. Where they have remained open the rolling stock is often old, the permanent way poor and the destinations served irrelevant for working commutes. Local bus networks are scarce and primarily focus on the traditional task of transporting people into city and town centres.

A worker living outside a small village 60km to the west of Paris, working close to Roissy Charles de Gaulle airport, can only commute by car. A family living in such a location needs two cars as there is often no public transport. That means two elderly diesel vehicles purchased for about €2,000. The 1998 35-hour working week was predicated on low salaries. Unemployment in France hovers at about 10 per cent.

Every Gilet Jaune euro is counted, budgeted and allocated. An increase of €60 per month for diesel was the last straw. This in a country where credit cards are virtually unknown. French Visa and Mastercard are debit cards.

People live in places where they have no family connections. They leave early in the morning and return late in the evening, shopping online, picking up purchases at a supermarket “drive” bay. The village cafe-bar and bakery will be closed when they get home. Social engagement, when it exists, is often in their parent’s village, not the one they live in.

Drink-driving legislation means no after work drinks on a Friday before the drive home. Increasing taxes on tobacco also hits poor smokers. Gilets Jaunes see themselves as becoming steadily poorer, with less hope than their parents’ generation.

Well-intentioned messages on the need for carbon taxes, the need to shift from dirty diesel cars to electric or hybrid ones, 10 times more expensive than the ones they drive, only compound feelings of alienation.

Most Gilets Jaunes don’t vote, and the ones that do frequently vote blank. They work in businesses where unions don’t exist, French unions, having utterly failed to move with changing economic realities, are now non-existent outside large businesses and the public service.

Gilets Jaunes are disaffected, see themselves as forgotten, ignored or, at best, treated with condescension. The similarities with pro-Brexit voters in northern England, or rust-belt Trump voters in the US are striking.

The biggest difference is that the chaotic Gilets Jaunes movement is a very traditional political movement demanding action from the French government.

Macron’s former energy minister Nicholas Hulot said one of the reasons for his resignation was that the government was forcing people to choose between the “End of the World” as in climate change, and the “End of the Month” as in the next pay cheque.

The government has to find a way to defuse an increasingly radicalised, diffuse and angry national movement. Macron’s work to date on clearing obstacles to investment and economic development will take time to show results.

Boosting the take-home pay of the low-paid offers another form of stimulus and is probably the only avenue left to restore calm.

The Macron administration now has to discover a flexible response or face growing confrontation. A confrontation it can only lose.

Tony Kinsella is an entrepreneur and commentator. He divides his time between Ireland and southwest France