Irish Times view on cancer becoming most common cause of death 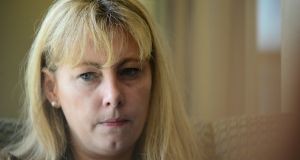 Emma Mhic Mhathuna, the mother of five from Ballydavid, Dingle Co Kerry who died earlier this year as a result of cervical cancer. Photograph: Bryan O’Brien / The Irish Times

With cancer overtaking heart disease as the most common cause of death, a significant milestone in Irish public health has been reached. According to the latest report of the National Cancer Registry, on average, 112 Irish people are diagnosed with cancer every day. And while the disease now causes some 8,875 deaths a year, more people are living with cancer as survival rates improve. Enhanced detection and new treatments have seen survival rates jump significantly over the past 20 years – from 40 per cent to 62 per cent for men and from 48 per cent to 60 per cent for women.

The total number of cancers diagnosed has increased by 85 per cent since the mid-1990s, primarily as a result of population growth and ageing. This trend is set to continue, with experts warning the number of cancer cases could double between 2015 and 2045. However these projections need not become a reality. Some four in ten cancers are preventable. National Cancer Registry director Prof Kerri Clough-Gorr said the projected increase may be held to 50 per cent if trends in some cancers – for example, declines in male lung and prostate cancer rates – continue.

We have the power, politically and personally, to partly stem the tide. The Government, through the Department of Health and the HSE, must ensure there is a sustained and expanded focus on prevention. In addition, many potential preventative initiatives lie outside the traditional parameters of health: including, for example, education, the built environment and the workplace. Cancer prevention must also focus on health inequalities.

Individually we can reduce our risk of getting cancer by eating healthily, exercising and limiting our alcohol intake. The Irish Cancer Society’s ‘We Can Quit’ programme is one of many services to aid smoking cessation. Supporting the uptake of HPV vaccine offers an unique opportunity to virtually eliminate cervical cancer. And an increasing number of cancer survivors means their particular needs must also be met. All of which requires an ongoing commitment from Government to fully fund the National Cancer Strategy.

1 Dangerous student stalker sentenced to seven years in jail
2 Trump says, ‘I have the best words.’ Now this comedian’s going viral for lip-syncing them
3 Brazilian gang held in Offaly had sub-machine gun and student visas
4 We need to pay very close attention to what is happening in Britain now
5 All students will not return to school even if social distancing rules are relaxed – McHugh
Real news has value SUBSCRIBE