Now inevitable that public money will be wasted on rural broadband 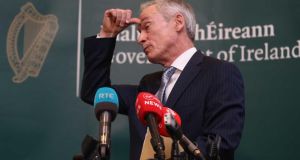 Minister for Communications Richard Bruton: why has the Government chosen to persist with broadband procurement on which public money will be wasted? Photograph: Sam Boal/RollingNews.ie

The decision to continue with the procurement of the national broadband plan (NBP) is not a surprise as the main findings of the review by Peter Smyth have been signalled for over a week. Nevertheless it is difficult to understand why the Government has chosen to persist with a procurement that cannot be justified in economic terms. It is inevitab le that public money will be wasted. Moreover, the Government is set to repeat the mistakes of the past and cede control of vital public infrastructure to private interests.

To understand how the decision has no economic justification, it is necessary to consider the procurement approach being used. The NBP is being procured using the so-called “gap-funding” model which is essentially a public-private partnership (PPP). PPPs have been used around the world and in Ireland for the last two decades but there is a growing consensus they have failed to deliver on their promise of better value for money for the taxpayer.

To illustrate, it is instructive to consider the experience of the UK which has been the pioneer of PPPs. PPP investment in the UK peaked in 2007-2008 at £8.6 billion but has followed a downward trend since. By 2016-2017 the level of PPP investment was close to zero. One of the main reasons for the lack of appetite for more PPP investment is that private finance is too expensive. The National Audit Office in the UK has provided examples such as schools where PPPs cost about 40 per cent more than the public sector alternative. It also highlighted the case of a privately financed hospital where costs were 70 per cent higher. Another problem with PPP has been the long-term nature of contracts which often last over 25 years. Experience has shown that this has locked governments into paying for services they no longer require and paying too much for necessary changes to contracts.

The case of the UK reflects the global experience and PPP experts have pointed to two critical conditions that must be satisfied if PPP is to succeed. These are 1. sufficient competition for contracts and 2. good governance. It is a matter of huge public concern that the procurement process for the NBP fails to satisfy these two essential conditions.

As all but one bidder has withdrawn from the competition for the contract, the competitive tension required to reduce the overall cost and encourage innovation and quality has been removed. We can have no faith in a process where a monopoly has been created before the contract is signed.

The relevant economic literature and international experience shows that the private contractor will be incentivised to use its monopoly position to extract benefits (economic rents) that it can’t accrue under competitive conditions. This is most likely to happen through contract renegotiations. Consider the following evidence: in 2004, World Bank economist JL Guasch examined nearly 1,000 Latin American infrastructure contracts (PPPs). He found that more than 45 per cent of contracts were renegotiated. Moreover, renegotiations tended to favour the private contractor and led to tariff increases, extensions to contract terms and reductions in investment obligations.

Turning to governance, it is widely recognised that infrastructure procurement is challenging. Good governance of PPP procurement is therefore essential. This should ensure that a delicate balance is maintained between encouraging private sector investment and safeguarding the public interest. This requires strong institutions, fair competition for contracts, zero corruption, transparency and accountability.

Notwithstanding the findings of the Smyth review, reputational damage has been done. In addition, the NBP has failed to meet the standards of disclosure identified by the International Monetary Fund in its 2017 review of the management of public investment in Ireland. These include the need for public disclosure of comprehensive information on PPPs, including the financial appraisal of PPP projects, as well as the criteria used to select them.

So far, none of this information has been made available for the NBP. Millions of euro have been spent on private consultants to assist in the procurement process. However, their financial analysis which justified the use of the “gap-funding model” remains a secret. Meanwhile, the procurement is being conducted by a Government department with no experience in procuring PPPs while the State’s specialist PPP procurement body (the National Development Finance Agency) is only involved in what appears to be an advisory role.

We have arrived at a point where the current procurement process for the NBP must be stalled. If that means running a new competition, so be it. The alternative is to continue pressing ahead with a process that has already gone off the rails. Ireland can do better than this.

Dr Dónal Palcic is a lecturer in economics and Prof Eoin Reeves is head of the department of economics at the Kemmy Business School, University of Limerick