Job stress has more than doubled in Ireland. What’s going on? 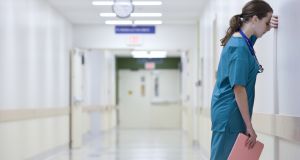 Long waiting lists and trolleys must give rise to difficult exchanges. Photograph: iStock

Although it may still be below the average for 10 western European countries, job stress in Ireland more than doubled from 8 per cent in 2010 to 17 per cent in 2015, the ESRI said this week.

The think tank also found that health sector and public administration workers are at particular risk, as are those in a group of jobs labelled by the report’s authors as associated professionals or technical. This group represents the foot soldiers of most organisations, not those in managerial roles but those doing the day-to-day graft that keeps the organisation functioning.

The ESRI findings are built on workers reporting that they feel stressed at work always or most of the time. There is real value in this approach. Previous approaches to the study of stress have held that stressors are external occurrences and that we calculate our stress scores by totting up how many negative events we experience in our lives. This approach gave rise to the Holmes and Rahe’s Social Readjustment scale and the oft-trotted-out line that “moving house is more stressful than getting a divorce”. Contemporary research, however, disagrees and demonstrates very well that how we see the situation is crucial.

Prof Stephen Gallagher of the University of Limerick has demonstrated the health cost of perceived stress. Across multiple contexts, this work showed that people who reported more stress produced fewer antibodies when they received a flu vaccination, for example. In other work, they saw that immune function was poorer overall in those reporting high levels of stress. In more recent years, this same group of researchers, along with colleagues from NUI Galway, showed that those who see their lives as stressful don’t have the usual cardiovascular response to stress – sometimes referred to as the fight-or-flight response. And of course, as well as these physical responses to psychological stress, people who report being stressed also tend to have poorer sleep, poorer psychological wellbeing and are more likely to be depressed.

All of these factors have an impact on absenteeism, so if you are unimpressed by the health and human cost of job stress, the bottom line is that stress costs the EU €91 million per annum, accounting for more than 50 per cent of all absenteeism. So on many levels, perceived stress really does matter.

The ESRI findings also suggest that that the emotional and relationship aspects of work life are central to how we experience our jobs. The report details that workers in Ireland are increasingly likely to report emotional demands and exposure to bullying, harassment and other forms of mistreatment than their western European counterparts.

Prof Gallagher set up a lab for the study of stress, anxiety and health. One of the experiments he ran, later published in the British Journal of Health Psychology, demonstrated that responses to stress could be socially mediated. In the experiment students were asked to complete the Trier stress test, which can reliably induce stress using a task that involves counting backwards in steps of 13. It is a task that is a mixture of annoying and maddening.

Before completing the task, students received messages about the level of stress they were about to face. The advice came from someone who presented themselves as either a fellow student or a person with whom they had no connection.

Throughout the test, cardiovascular responses were monitored and we found that those advised by fellow students that the task was challenging rather than stressful showed less cardiovascular reactivity and performed better on the task. On the other hand students who received negative messages from their peers about the task had a heightened stress response. Findings such as these point to the importance of getting a handle on job stress, as it is likely to be a feeling that can permeate through an occupational environment or employment sector.

How can we get a handle on this issue? One of the striking things in the report is that this increase in stress was reported over the five years from 2010 to 2015, the years we could refer to as the economic recovery. Equally as striking is that reports of job stress are highest in the health sector (18 per cent), public administration (16 per cent) and manufacturing (15 per cent).

The report unpacks the issue. It suggests that health workers are exposed to the greatest stress – they report high levels of emotional labour (having to deal with angry clients or having to hide emotions while at work), more bullying and harassment and feelings of being undervalued. They even go so far as to say that were if not for the sense of fulfilment many health workers associate with their jobs, the feelings of stress in this sector would be even higher.

Workers in public administration also feel undervalued, while those in manufacturing appear to have the greatest physical demands in terms of long work weeks and shift work. It is very hard not to link the concerns expressed by those working in the health sector to issues we hear of everyday in the health service. Long waiting lists and trolleys must give rise to difficult exchanges, and health workers have felt the fall-out of the recession in their own pocket.

In short, it would seem that the stress we each feel, though terribly personal, is in many ways both social and political. Addressing this worrying upward trend will require social and political action. Stress is costing our health and public services, so it makes good economic sense to address the structural issues that feed it.