Covid-19 corrals Irish politics and journalism towards science and solutions 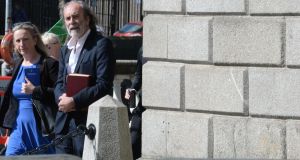 A notable feature of Irish politics since the onset of the Covid-19 emergency has been the generally reasonable tone of debate about the response. This has helped to promote a mood of national solidarity in response to the crisis. The primary reason for the relative political calm is that, for most people, Covid-19 is far more important to their daily lives than the petty disputes of party politics.

Nonetheless, the largely constructive political atmosphere has played a significant part in persuading individuals to accept a whole range of restrictions to their liberty and, in many cases, a negative impact on their livelihoods, in the interests of society as a whole.

An important element in generating the mood of solidarity has been a widespread acceptance that the advice of experts should underpin the decisions of the Government. Instead of denouncing difficult Government decisions, as is the norm in Irish politics, the Opposition parties have been keen to show a similar zeal in following expert advice.

While it would be naive to expect that rational political debate will remain the norm once the crisis abates, it is worth noting the generally constructive response has exposed the shallowness of most of what passes for political debate in Dáil Éireann. Instead of careful consideration of issues as they arise, with expert advice being taken seriously, Dáil debate is usually conducted on a partisan and aggressive basis in which the advice of experts is wilfully ignored and Ministers are frequently subject to ignorant abuse rather than being held to account in a rational manner.

It was striking that the union representing senior civil servants felt it necessary to make an appeal to the Covid-19 Dáil committee to treat its members who appeared as witnesses in a respectful matter. In the event, the TDs on the committee asked searching questions but refrained from the grandstanding and abuse that brought the Public Accounts Committee into disrepute. Argument and conflict are an inevitable and necessary part of political debate but what the Covid emergency has shown is that rational and respectful disagreements produce better outcomes for society than the hectoring and bullying that so often passes for opposition politics.

Politicians of all stripes would do well to consider carefully the judgment handed down by Mr Justice Charles Meenan in the case brought by John Waters and Gemma O’Doherty against the laws passed by the Dáil to deal with the consequences of the pandemic. Dismissing their application for leave to proceed with the case, the judge said the two had not provided the court with any expert evidence or facts to support the view that the laws they objected to were disproportionate or unconstitutional. The laws brought in by the State to help deal with the pandemic, he said in his judgment, were “constitutionally permissible”.

The judge went on to point out that the applicants had “no medical or scientific qualifications or expertise, relied on their own unsubstantiated views, gave speeches, engaged in empty rhetoric and sought to draw parallel to Nazi Germany which is both absurd and offensive”. He summed up his argument in the following terms: “Unsubstantiated opinions, speeches, empty rhetoric and a bogus historical parallel are not a substitute for facts.”

Politicians on all sides in Leinster House should at least make the effort to take the judge’s injunction to heart and attempt to deal in facts rather than political abuse. The media too should also take a serious look at itself in the light of the judge’s comments. It is hardly a coincidence that the two individuals who drew such a stinging rebuke are journalists by profession.

Some interesting observations about the impact of the Covid emergency on the quality of journalism worldwide were made recently by Ulrik Haagerup, who heads a Danish foundation dedicated to the promotion of fact-based journalism. He noted that just as politicians pressed pause on infighting and attention-seeking and put the needs of their citizens first, the news media moved away from the usual stories that focus on drama, conflict and extreme opinions.

'Editors and reporters, often working from home, strove to give people the best obtainable version of the truth'

“Instead, we were busy reporting the story of our lifetime. Editors and reporters, often working from their own homes, strove to give people the best obtainable version of the truth. In doing so, they proved to the public, publishers and others in the industry why curated news and responsible journalism is such a valuable public good.”

He argued that the crisis has reinforced the importance of the core mission of journalists to provide readers with facts, uncover problems, ask critical and curious questions. “But it has also highlighted something that is too often missing from the discussion: that part of our mission must also be to inspire potential solutions to the challenges facing all of us.”

The problem about so much media coverage of politics is that it unthinkingly gives the biggest headlines and the most airtime to the rudest and loudest voices. As governments in every country attempt to chart a way out of the emergency, those voices will get ever louder. Solidarity rather than polarisation is what society needs in the difficult times ahead and the media as well as politicians have a role to play in achieving that.

1 We need to pay very close attention to what is happening in Britain now
2 Emily Maitlis thanks BBC viewers for support after Cummings row
3 The human cost of Covid-19: new figures reveal the toll on Ireland's care homes
4 Trump says, ‘I have the best words.’ Now this comedian’s going viral for lip-syncing them
5 ‘Ireland should take calculated risk’ in greater easing of Covid-19 restrictions
Real news has value SUBSCRIBE