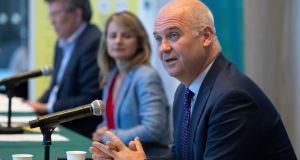 The current Covid-19 pandemic has demonstrated the importance and value of having access to credible, trustworthy and independent scientific advice when trying to develop ways to confront an emergent pathogen.

Keeping up with the coronavirus has required the availability of accurate medical and scientific evidence delivered in a transparent and timely way to help decision makers gain control over the virus’s spread. The difference between doing this well and doing it poorly can literally mean the difference between life and death.

Ireland has fielded a strong group of experts led by the government’s Chief Medical Officer Dr Tony Holohan with the back-up of the National Public Health Emergency Team for Covid-19 (Nphet) established specifically for this pandemic. Dr Holohan chairs the Nphet for Covid-19 which is made up of experts from various government department and state bodies, from the universities and from the hospitals.

Nphet in turn has a number of subgroups focusing on issues such as overall advisory and planning, hospital preparedness, epidemiology, research and behavioural change. Each group pursues its specified area and submits recommendations and findings that arise from this research activity. Importantly, the evidence and recommendations have in the main been accepted by the Government with policy decisions guided by what the experts are saying.

The shared threat posed by Covid-19 helped people to realise action was needed. They were willing to follow the expert advice and put their trust in Ireland’s Chief Medical Officer, Nphet and the Minister for Health Simon Harris because of the evidence in its favour.

The evidence gathering by Holohan and the Nphet worked so well because it is sourced through an authoritative network comprising specific specialisms that allows individuals to focus on their specific job or specialism while contributing to the whole-of-country response. It meant that many problematic issues could be tackled at the same time, allowing advice from the groups to be put into practice almost immediately.

It is clear that a similar networked approach could be used to tackle other challenges facing government and society such as climate change, the unacceptably low uptake of safe and valuable vaccines and resolving the Dublin water supply issue before it can become a crisis.

Looking beyond the current emergency there are many situations where a government, Oireachtas committee or our elected representatives would benefit from access to scientific evidence to help inform effective policy making. The networked method adopted by the Nphet for Covid-19 would likely be very effective at producing the hard information needed by policymakers.

Unfortunately, our current system for providing scientific advice to government does not readily deliver this. Ireland has a Chief Scientific Adviser who regularly assists the Government, but unlike in many other countries, there is no network of expertise established to assist him in this work, no network to bring experts together under the aegis of the Chief Scientific Adviser. It is also worth noting that not all situations that would benefit from scientific evidence necessarily represent a crisis.

The Irish experience differs considerably from that seen in many other countries, as revealed at a recent workshop this past February organised by the Royal Irish Academy and partnered by the Science Advice for Policy by European Academies (SAPEA). The discussions centred on identifying the attributes required to help build a strong, dynamic and responsive relationship between policymakers and the research community.

The workshop demonstrated that Ireland has ready access to trustworthy, independent and transparent science expertise from departmental staff and higher education institutions, as we have seen during the Covid-19 pandemic. While the Nphet for Covid-19 will stand down once the emergency is resolved, the need for sound, reliable and rigorous scientific evidence will not go away.

A new development strategy for research and innovation is due for completion later this year, making it timely that the government revise the role played by the Chief Scientific Adviser, broadening the remit but also seeking to establish a network of experts, those already serving in government departments, but also outside advisers who can be called upon when the need arises.

This would be an independent multidisciplinary group of scientific and research advisors under the aegis of the Department of the Taoiseach. It would have a role similar to Nphet in assessing research-based evidence, and would support greater cross-governmental department integration of scientific evidence needed for decision making. Such evidence would be sought not only from the life or medical sciences but also from lawyers, child development experts, historians and philosophers to provide the widest and most informed lens to capturing the evidence and knowledge needed to inform a truly comprehensive policy discussion.

Such a network would need to be strongly interdisciplinary both to improve its information gathering but also to demonstrate a depth and breadth of knowledge to help avoid challenges to the credibility of the advice provided and develop sustainable longer-term solution thinking. The members of such a network would also benefit from specialist training in how to provide the evidence needed for policymaking

It would be important however that there be a distinct separation between the roles played by those providing the scientific advice and the policymakers and politicians who would be interpreting and applying the advice for the benefit of society.

Mary Canning is president of the Royal Irish Academy

To advance further discussion on the issues the Royal Irish Academy has produced a discussion paper on science advice in Ireland and Europe. https://www.ria.ie/sites/default/files/ria_discussion_paper_on_science_advice_in_ireland_and_europe.pdf

1 Tyrone midwife on the cover of Vogue magazine
2 In six months we will be in the grip of a 1980s-style recession
3 Normal People: Full-frontal nudity was not its most radical feature
4 Angela Merkel sweeps in to save the euro zone
5 Barack Obama urges those protesting in US to seize the momentum
Real news has value SUBSCRIBE