To spark a post-Covid renaissance, we need a great meeting of minds 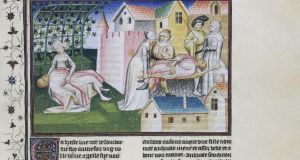 A detail from The Decameron by Giovanni Boccaccio, set in a villa outside Florence at the height of the Bubonic Plague

Giovanni Boccaccio’s Decameron was one of the first literary masterpieces of the Renaissance. It is set in a villa outside Florence, at the height of the Bubonic Plague. Seven women and three men flee the plague, ensconce themselves in a villa and spend 10 days flirting, philosophising and debating. Doubtless, Netflix or other entertainment channels will copy the idea and send an ensemble of Hugh Grant, Gwyneth Paltrow, George Clooney, Rooney Mara and friends off to the Hamptons to repeat the experience.

If the Decameron were to be repeated, the guests in the villa might even ponder how the world has been changed by coronavirus. To push the analogy even further, we could imagine the main ministers of the next cabinet (there were seven women and three men in the Decameron) sitting down and reflecting how the lessons of the crisis can be embedded in the programme for government, especially as the outline put forward by Fine Gael and Fianna Fáil has been criticised for a lack of detail and new ideas.

Beyond the human and healthcare tragedy, the group might reflect, first from an international point of view, that the crisis has exacerbated many of the faultlines that beset the world economy. Indebtedness is even higher, wealth inequality more extreme in countries such as the US, and, importantly, globalisation is now dead. We are now acutely aware of the link between climate damage and economic activity; the digital economy will accelerate and so-called “new” economic concepts like happiness have come into focus.

In Ireland, as in other countries, that means that economically the next year will be spent trying to get growth going amidst the financial handbrake of high debt levels, while changes in trade and protectionist rhetoric put pressure on the aerospace and pharmaceutical industries here. The better news is that the digital economy will thrive.

The takeaways for Ireland are to accelerate efforts to attract and build digital industries in Ireland (eg payments) but to set high rather than low standards (and funding) for data protection, cyber risk and intellectual property. In the future, those EU countries with the gold standard in quality and security in industries such as fintech will keep inward investment, as opposed to lose it to countries with better technology (Estonia) or weaker regulation (Lithuania). More broadly, Ireland’s banking sector, domestic digital infrastructure and health technology all need an overhaul.

Sticking with economics and politics, perhaps the clearest lesson is the way a common problem has had such different impacts across countries; Ireland and England is a good example, as is France versus Germany. In short, countries that have good institutions, value experts, have high levels of trust and social cohesion and decent public goods have done well (eg Germany and New Zealand).

Ireland is amongst those countries, but the stress test of coronavirus has been met by exceptional performance by public servants (doctors, gardaí and the speedy delivery of the Covid-19 Pandemic Unemployment Payment, for example) rather than the elan of institutions. The mood of the recent general election showed that many are not convinced by the quality of many State institutions – from dysfunctional healthcare to an underfunded army. Equally, the funding of third-level education will become a topic for debate, at a time when the value of an educated society and workforce has been underlined.

One task of a new government is to rethink the structure and workings of institutions such as the health service. In many countries, coronavirus has shown how institutional processes can be sped up, better connected by technology and more responsive. This is also an opportunity to incorporate mental health and preventative health as root parts of the health service in Ireland.

In Ireland, Government departments need to be less siloed and better at sharing information and delivering cross-department projects; they need to experiment with change through pilot projects, and cut back on middle management. The is also a need to rethink the public procurement body so it better synthesises and controls the cost of goods and services the State consumes.

Much policy energy in the past three years has been consumed by Brexit, where one of the few winners is Irish diplomacy. The post-coronavirus crisis world may well be a more fractured one – the US-China relationship is at its worst level, and the EU is struggling to be a serious, strategic player.

Within the EU, countries such as Hungary will increasingly have to choose sides: adhere to the values of the union or potentially leave. In Ireland’s case, we can be a bridge for the US and UK into Europe, but also need to be aware that most Europeans know far less about Ireland than, say, Americans do. Ireland will have to invest itself more – culturally and politically – in Europe. One way is pick a small number of policy areas – such as the need and method for the EU focus on growth, or the need to change the way the EU communicates with its citizens to a more grounded, practical and warmer approach.

A final conversation that the modern Decameronites might consider is security – which is not something that is discussed in broad terms in Ireland. The coronavirus crisis has highlighted how multifaceted this is: food security, cyber-attacks and geopolitical tensions are some of the issues that have been more prominent globally in the last two months. In Ireland’s case there are three things to be done.

The first is to interpret security broadly – from security from environmental and climate damage (eg flooding), to national cyber security (which is poor) to job security (where the State’s response has been good). The second is to interlink institutions of the State – for example the Central Bank and CAB, to disrupt criminal supply chains. Finally, in the context of Brexit and the likelihood of Scottish independence in coming years, there is a telling need for an internationally managed and funded Marshall-type plan for Northern Ireland.

Boccaccio’s Decameron is a small reminder that great things can follow disaster. The next government should aim to live up to this.