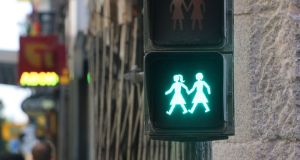 ‘There is still a long road ahead of us to eliminate the stresses of endemic bullying and other forms of homophobia.’ Photograph: iStock

Five years ago the people of Ireland made history when we became the first country anywhere in the world to vote by referendum in favour of marriage equality. It was a triumph for inclusion and equality that sent a powerful message to Ireland’s LGBT+ citizens that they had the support of a huge majority of voters.

We, the parents, brothers and sisters, colleagues and friends of Ireland’s gay citizens, knew how deeply they had suffered because of second-class citizenship and, like them, we were greatly reassured by the solidarity shown during the referendum. We knew their future was at stake and they would continue to need our help for there was still a lot of work to be done to help to make their future safe and happy.

The 62 per cent Yes vote was a good start, a big step into that future. It offered the LGBT+ community a firm sense of acceptance and gave LGBT+ young people the freedom to dream about a future untroubled by past attitudes and inequalities. The hope it generated cannot be underestimated but it left work to be done to make it real.

Five years later we are entitled to look back at that watershed moment with a sense of national pride. It was, however, a start not a finish line, and we now need to galvanise fresh momentum to bring about an end to the continuing suffering of the LGBT+ community and especially of its younger members. The evidence, from report after scholarly report, is inescapable that there is still a long road ahead of us to eliminate the stresses of endemic bullying and other forms of homophobia and the anxiety they generate.

The 2019 BeLonG To Youth Services School Climate Survey painted a bleak picture of life for many LGBT+ young people. Almost three-quarters surveyed said they felt unsafe at school, and a large majority had experienced homophobic remarks from other students. More than a third reported being shoved or pushed because of their sexual orientation, while more than one in 10 reported being punched, kicked or injured.

With no hate-crime legislation in Ireland, it is worrying to read the Call It Out report: “Ireland and our LGBT Community” (2019 TENI & University of Limerick). It tells us that one in three members of the LGBT+ community have been threatened with physical violence, and one in five punched, hit or physically attacked.

So, marriage equality did not solve all the problems. LGBT+ young people still experience discrimination, bullying and violence as a result of their sexual orientation and gender identity, even in an Ireland where they are free to marry the person they love. Hostile attitudes and behaviour still make their lives a misery and the streets unsafe for them, and that is simply unacceptable.

Five years on from that historic Yes vote, there is still much to do in eradicating the disease of homophobia from hearts, minds and tongues, from homes, schools, workplaces and communities. But this is a toxic virus we can control with sustained effort. We can close down the space in which homophobia flourishes, depriving it of the oxygen of acceptance or silence or lack of challenge on which it thrives. That is the pathway to a healthy, integrated society where all lives matter equally and none are needlessly wasted or only half- lived.

By becoming firmly intolerant of homophobic intolerance, we will become a better, healthier and safer society

In these Covid-19 days when we have adapted rapidly to massive changes in behaviour and accepted unprecedented restrictions in order to protect the health and lives of our citizens, we know we are capable of digging deep to make necessary changes for a higher cause. We showed that impressive spirit five years ago when we voted for marriage equality. We showed it again in the unprecedented numbers who turned out for Gay Pride in 2018 with its theme of “We Are Family”. These displays of unanimity of purpose and principle give me hope that we can make the changes and progress that will secure the full social and civic acceptance of our LGBT+ citizens.

It depends on and begins with each one of us who is willing to take a stand against discrimination, whoever or wherever it comes from.

By becoming firmly intolerant of homophobic intolerance, we will become a better, healthier and safer society and it will tell our LGBT+ community and, especially our young people, that the resounding Yes of five years ago was a statement of intent about much more than marriage equality. It was an assertion that Ireland is a place of inclusion, equality and safety for all.

Mary McAleese is a former president of Ireland

1 Ireland’s teenage pariahs: ‘We are really at breaking point now’
2 Christmas visits to family a ‘dangerous thing to do’, warns Scally
3 Late Late Toy Show: Music, tears, Tubridy’s F-bomb and €5m for charity. What a night!
4 Shot, bayoneted and clubbed: the ruthless lengths the IRA went to at Kilmichael
5 One man dies, five injured after partial building collapse in Tralee
Real news has value SUBSCRIBE