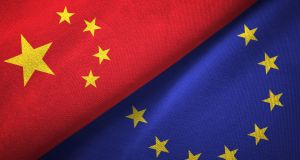 As China’s rise went global in recent years, the EU’s relationship with it has been changing - and now the corona crisis is affecting that change. From an essentially bilateral relationship focused on economic cooperation, it has turned into a global relationship where deep cooperation co-exists with elements of sometimes open competition. Overall, the EU’s stance has become more realistic and assertive.

In parallel, we have also strengthened EU cooperation with other major Asian partners, notably Japan, South Korea, India and others. For its part, China has proceeded with a truly impressive transformation that is having geopolitical consequences.

The EU´s relationship with China is so multi-faceted that our approach cannot be reduced to one simple prism. Our 2019 Strategic Outlook, endorsed by all EU member states, underlines that China is simultaneously a partner with whom the EU has closely aligned objectives; a negotiating partner, with whom the EU needs to find a balance of interests; an economic competitor in pursuit of technological leadership; and a systemic rival promoting alternative models of governance.

These four elements need to blend into a coherent policy. Developing a joint EU approach to superpowers is never easy, as each member state has its own viewpoints and sensitivities. And the China case is no exception. What’s more, China is not shy about sometimes playing on these differences. But surely it is up to us Europeans to maintain the necessary collective discipline. Unity is a pre-condition for influence, since not even the biggest member state acting alone can influence a superpower.

The changes in the EU-China relationship have been accelerating since the outbreak of the coronavirus. There have been different phases. In the beginning, when Chinese hospitals were overwhelmed, the EU offered extensive support, without much publicity. Later on, when Europe became the centre of the pandemic, China sent large supplies of medical equipment - and it made sure the world knew about it. The key point is that we should all demonstrate mutual support and international solidarity - and the European Union has always proven how strong its commitment is - while avoiding the politicization of emergency medical assistance.

It has become a bit of a mantra to say that the global corona crisis requires a global response. But it happens to be true. We clearly need a multilateral response across all dimensions of the crisis: limiting the spread of the virus, boosting research on treatment and vaccines, addressing the consequences in developing countries and working on the economic recovery. In all this, we count on China to play its full role, in line with its global weight and responsibilities.

For instance, we have a shared interest in helping the vulnerable in Africa and elsewhere cope with the pandemic. As EU, together with the EIB, EBRD and member states, we have mobilised a €20 billion package to assist our partners to deal with the health emergency and the longer-term consequences. We know more will be needed, including sizeable debt relief and we call on China to play its part.

I am eager to identify ways that the EU and China could work together on this. Another obvious joint priority must be to ensure a ‘green recovery’ strategy, using the emergency rescue packages to accelerate our energy transition and underpin our climate commitments under the Paris Agreement. To strengthen our defences against future pandemics, we also need a thorough, independent scientific inquiry into the origins of the crisis.

In the bilateral sphere, a successful conclusion of the long-running negotiations on an EU-China comprehensive agreement on investment would send an important signal of our mutual commitment to a rules-based economic partnership. In the same vein, we need follow-up to Chinese commitments on industrial subsidies and forced technology transfers.

Both the EU and China often state their commitment to promoting multilateralism and the UN system. That common language and common stance is crucial, especially at a time when the multilateral system is openly challenged. But we also need to acknowledge that our approaches on multilateralism differ, for instance on the universality and indivisibility of human rights or when it comes to UNCLOS and the tensions in the South China Sea.

In the cyber area, both sides emphasise the need for a multilateral approach, but China’s state-centric stance contrasts with the EU’s multi-stakeholder approach based on respect for fundamental rights and freedoms. And when it comes to the WTO, China is extremely supportive formally and defends the WTO in its current form, including the dispute settlement system, but in practice it has shown little readiness to engage in the meaningful reform of the WTO that is clearly needed.

When it comes to Europe itself, there are also lessons to be learnt from the crisis - some of which will play into our relations with our international partners including China. We should avoid excessive dependence in strategic sectors by building stockpiles of critical materials. We also need to shorten and diversify our supply chains.

Since diplomacy is best grounded in clear principles, the watchwords for EU-China should be trust, transparency and reciprocity. We should move forward together, based on a realistic assessment of China’s strategic intent and the EU’s common interests.

1 Why you still can’t have a European holiday this summer. Or can you?
2 Nine more deaths from Covid-19 recorded in Ireland along with 24 new cases
3 Irish abroad: Are you worried about when you can visit home again?
4 Former Kilkenny hurler dies after bike struck by tractor
5 One of most powerful images of War of Independence
Real news has value SUBSCRIBE