The Irish Times view on the EU-UK talks: trouble ahead 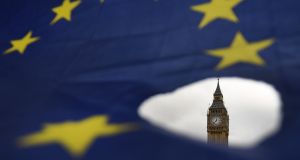 A European Union flag during a demonstration against Brexit outside the Houses of Parliament in London in March 2017. Photograph: Andy Rain/EPA

Brexit has slipped from the headlines since the Covid-19 pandemic hit, but it is now again demanding our attention, as predictable problems in the talks between the UK and EU reappear. In recent days the UK has published three items: a draft trade treaty with the EU; the tariffs which it intends to impose on trade from the EU if this deal is not done; and a document on how it proposes to apply the special arrangements relating to Northern Ireland. These highlight the difficulties that lie ahead – and the price of failure if the UK leaves the transition period without an agreement.

Even without Covid-19, the sensible course would have been to apply the clause in the withdrawal treaty which allows for the transition period to be extended. That the UK government has set its face against this, despite the epidemic, shows that the priorities of Brexit continue to be driven by ideology, rather than practicalities and common sense. Running the risk of adding a Brexit economic shock to the enormous cost of the pandemic is ludicrous.

The mood in the talks has been fractious and, assuming the June deadline for agreeing an extension passes without this being triggered, negotiators will come under huge pressure heading into the autumn. The tariff schedules published by London show the disruption to trade which not doing a deal would create. Irish agriculture and the food sector would be particularly exposed.

The matters to be agreed also include the separate application of the Northern Ireland protocol, the deal agreed late in the day to allow the UK to exit while avoiding the need for checks and controls at the Irish Border. The application of this agreement was always going to be contentious and the publication by the UK of its view of how this should work confirms this. The EU will not accept that the controls proposed – including no new customs infrastructure and a light touch regime on goods entering the North from Britain – go anywhere near far enough to protect the EU’s single market.

The UK does accept that checks are needed on animals and food products – and that new procedures are required to control the movement of goods into the North, albeit these are much less than the EU would want. The EU will argue that more rigorous checks are needed on more products along with a tighter regime to ensure the correct tariffs are paid. However, any additional checks would be politically controversial in Northern Ireland and further add to business costs. And London’s plans to allow relatively free access for goods moving to the rest of the UK from Northern Ireland also raise questions. This issue will be dealt with separately from the main Brexit trade talks, though the two are obviously linked. As ever, the problem in striking a deal is that Brexit is essentially an exercise in damage limitation.