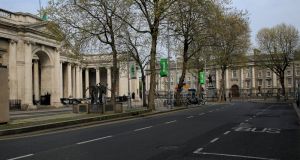 Parts of Dublin city centre, including College Green, are to be annexed for pedestrians and cyclists. Photograph: Gareth Chaney/Collins

Things that seemed unimaginable and unattainable until very recently are suddenly happening on Dublin city streets. After 12 years of planning, a cycle path has popped up on the Liffey’s north quay. Thirty years after Green Party leader Eamon Ryan said he first asked for it, a contra-flow cycle lane – a path running against the flow of traffic – has been installed on Nassau Street, removing the need for cyclists to circumnavigate Trinity College. Cycle lanes have been protected from motorists, and pedestrians have finally been given priority at traffic-light crossings. But perhaps the biggest transformation, and one sought by campaigners for decades, is about to come – the annexing of large parts of Dublin city centre, including College Green, for pedestrians and cyclists.

All these measures are being implemented as part of Dublin City Council’s response to the pandemic. They are being justified by the need to give pedestrians and cyclists space to separate themselves from others, without having to step out, or swerve, in front of a car. Some commentators have accused the council of trying to pedestrianise the city “by stealth”, cynically using a health crisis to ban the motorist from the city centre.

If this is the case, perhaps it is about time. Years of consultation and the publication of strategies to improve the lot of the majority of those using the city centre on a daily basis, has resulted in inaction, and has left cyclists and walkers battling through a hostile and dangerous environment which has been damaging their health for years.

The council refers to these measures as a “temporary mobility plan” to ensure people can use the city centre safely when shops, cafes, restaurants and other businesses begin to reopen, and surely even the most committed driver can’t argue with that? However, their fear might be that once these temporary measures are introduced, they will remain in place permanently. Given that the council is looking at a 12-18 month timeframe for retaining the measures, and given the length of time it takes for any change to be implemented in the city, they might be right. Let’s hope so.