Step-down facility – Frank McNally on the accidental amphitheatres of Dublin 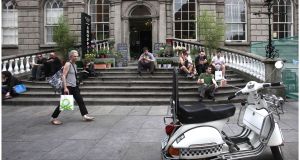 The steps of the Powerscourt Centre in Dublin. Dublin is in general not well stocked with such stately staircases. Photograph: Brenda Fitzsimons

Walking home through Dublin’s Liberties on one of the warmer weekend nights last month, I was surprised to see a group of locals standing around on a footpath, chatting and drinking pints. The gathering was at least 20 people short of a Twitter scandal, but its location seemed oddly random until I realised that, as well as being near an off-licence, it also boasted a set of stone steps – the ones in front of the old Iveagh Market, on which a few of the group sat.

This had the effect of turning a nondescript corner of the city into a miniature amphitheatre, from which, at a time when pubs and cafes were all closed, the passing drama of Dublin life could be observed.

It may be for a similar reason that South William Street emerged as one of the social frontlines of the lockdown. In that case, the amphitheatre is more obvious – the fan-shaped rear entrance of the Powerscourt Centre, descending in seven steps towards a stage supplied by the junction between some of the city’s trendiest pedestrianised streets. Mind you, when I passed there last Saturday evening, amid a mass early outbreak of Christmas spirit, the steps were the least crowded part. There was nobody sitting on them, at least, because they had just been sluiced down with water (the steps, that is, not the people), presumably to make them inhospitable to posteriors.

Dublin is in general not well stocked with such stately staircases. It has nothing like the Spanish Steps in Rome (where sitting was banned last year, months before Covid-19). Probably the most famous steps in Ireland’s capital are the ones in front of the GPO. And those don’t exist, except in people’s imagination.

The city does, however, have at least two sets of 40 steps – the better known of which descends from High Street, beside St Audoen’s Church, to an area once known as “Hell” because of the pubs and brothels there. Hell is long gone from the area now, replaced by nothing more obviously sinful that Sam Stephenson’s half-finished design for the Civic Offices on Wood Quay.

That was also supposed to have been a series of steps – four monumental office blocks echoing the basalt columns of the Giant’s Causeway as they descended in size and altitude towards the Liffey. Then, half-way down the stairs, like an angst-ridden version of Kermit the Frog, Dublin Corporation lost its nerve about the idea and the set was never completed.

The other 40 steps are in Kilmainham, on an alleyway that in old maps used to have the charming title of “Murdering Lane”. In the late 19th century, this was officially changed to “Cromwell’s Quarters” – a marginal improvement, which remains its name today. Alas, it’s still not a place most people would be tempted to sit down in, day or night, although even before the pandemic, it was associated with consumption of take-away alcohol.

So, at least in summer, is another set of steps in Dublin 8 – the four-sided one at the base of the Phoenix Park’s Wellington Monument. Offering a place for people to congregate, those may be the sole remaining virtue of an obelisk that lacks interior stairs, or a viewing platform, or any aesthetic value, while commemorating a man with whom modern Ireland is out of sympathy.

By contrast with Wellington’s, the steps inside the entrance of the Great Palm House in the Botanic Gardens are a modest affair. There are only five of them and, palms aside, there is not much to look from there. As a place to sit and think, however, they may be officially unparalleled in Dublin, thanks to the only person ever known to have made a habit of reclining there. He is now even commemorated by a plaque.

His name was Ludwig Wittgenstein and his legacy as one of the 20th century’s great philosophers includes a metaphor known as “Wittgenstein’s Ladder”, which says this about one of his own key texts:

“My propositions serve as elucidations in the following way: anyone who understands me eventually recognises them as nonsensical when he has used them – as steps – to climb beyond […]. (He must, so to speak, throw away the ladder, after he has climbed up it). He must transcend these propositions and then he will see the world aright.”

Wittgenstein’s fondness for the actual steps in the Botanic Gardens may have had a more prosaic explanation. He was staying in Dublin during the winter of 1948-9.

As well as being a quiet place to work, the Great Palm House must have had one of the few stone staircases anywhere on which balmy temperatures were guaranteed.